Evolution Gaming Is On A Roll

The industry leader in Live Casino games development and platforming, Evolution Gaming are seeing even greater success throughout 2019 with big news on both through their games development and their quarterly earnings. Here’s the latest news on what’s been happening at the industry’s biggest and most successful provider of all of your favourite online live casino games. Having been around since 2006, Evolution have managed to rise to the top and become one of the most sought after live casino providers for any emerging online casino who seek to offer table games with real dealers offering instant interaction via webcam and live chat. 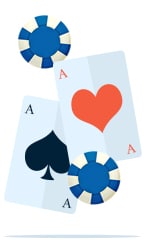 Evolution already offer a vast variety of Blackjack, Roulette and Poker, amongst other live casino games for players to divulge in. However, their latest announcement sees their library expanding with 2 Hand Casino Hold’em and Free Bet Blackjack, launching across the multitude of casinos already offering Evolution, as part of their games selection. While Evolution already offers a vast amount of choices for Canadian players, these two new additions have a stronger emphasis on the action and benefits one might find at a land based casino.

Their brand new Free Bet Blackjack table allows players more options when it comes to Double Down and Split bets, which now have more automotive and intuitive features that can detect if a player is able to qualify for the above mentioned bet types and thereby actively offers the option for those able. This provides a much more accessible and procedural playstyle for players, due to the more sophisticated nature of the technology backing the features of this new Blackjack variant, which actually now theoretically allows for an unlimited amount of players to be seated at the same table. Meanwhile, the 2 Hand Casino Hold’em is built on a similar platform allowing for unlimited seating and no queuing to get into the action. What makes this new variant of Hold’em even more exciting is the fact that players are now dealt two distinctive hands, from which wagers can be made on either or both of the hands dealt during each and every round of play.

You should check out our more complete review of Evolution Gaming, available at our Software and Games Provider Review section, right here on the Casino Top website.

We speculate this growth is due to their clear-sighted investments in games development, such as the new releases mentioned above, as well as their supporting platform that is providing more accessible integration with a growing number of online casinos offering Evolution games as part of their games portfolios. Something that Evolution has been focusing more strongly on over more recent times.