Crime in the Most Popular Casino Cities

Crime in the Most Popular Casino Cities

Wherever there is money, there are going to be criminals chasing after it. So, where better to breed crime than cities like Las Vegas and Atlantic City? Cities like this are where casinos reign supreme and there's plenty of money around. We had a look through the FBI's crime statistics to see which gambling cities ranked highest in terms of crime and which crimes were committed the most frequently.

Before you bet on a link between crime and casinos, look at the statistics for yourself; some of your preconceptions may come crashing down like a house of cards. We have researched for you and our team at CasinoTop are familiar with various aspects of the gambling industry. 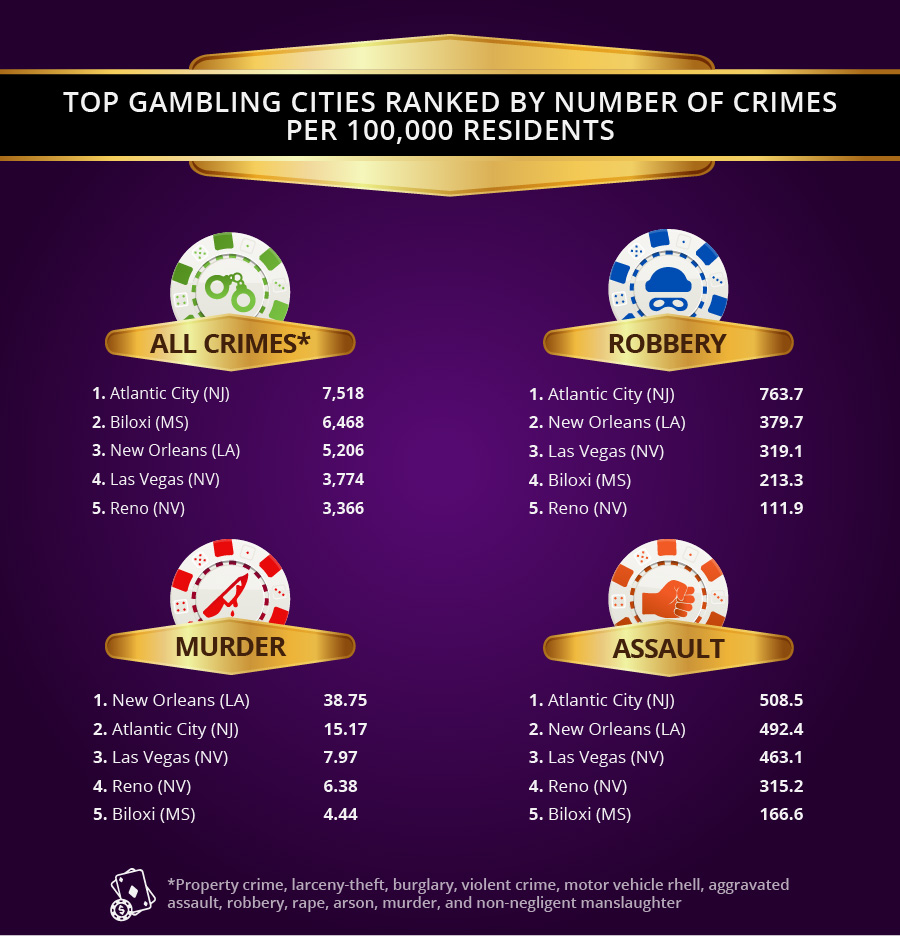 When it comes to crime in the top five gambling locations in the US, Atlantic City is no picnic, ranking first in overall crime per 100,000 people and second in robbery and assault. That may come as no surprise, given that it was the site of the first-ever nationwide mafia gathering in 1929 (attended by the likes of Al Capone) and the setting for the hit TV show "Boardwalk Empire."

There is only one criminal category in which the top contender was different. When it comes to homicide, the Big Easy (New Orleans) is nearly five times as bad as Sin City (Las Vegas). New Orleans also has more than twice as many homicides per 100,000 people as Atlantic City, which took second place in the rankings. 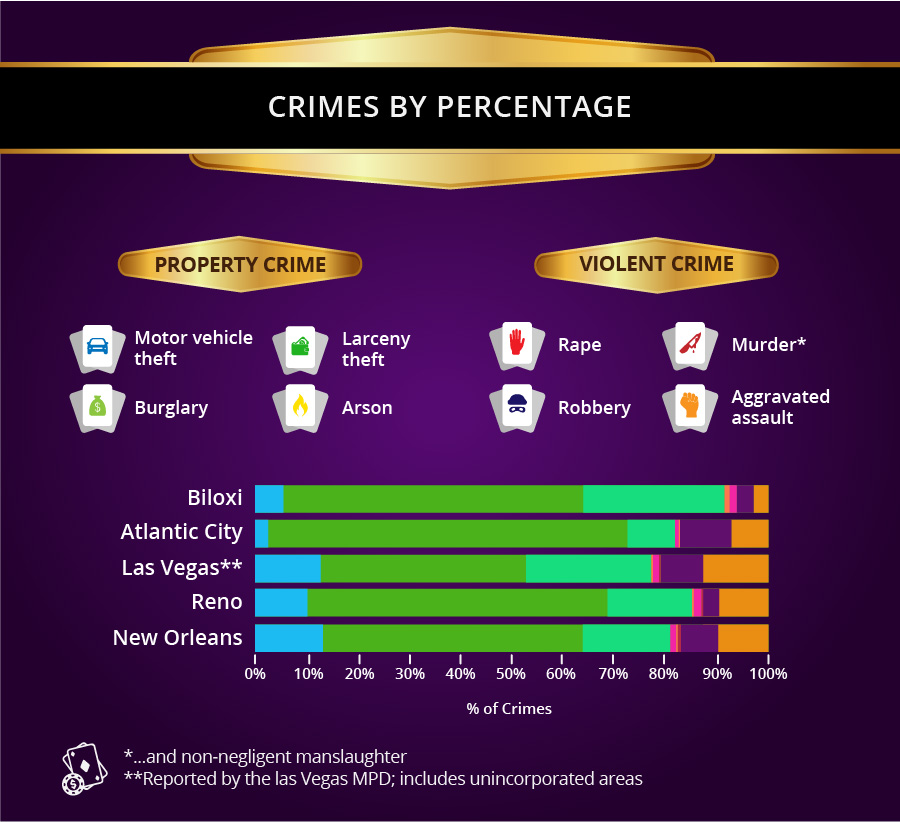 It's no surprise that theft or larceny and burglary account for such a large percentage of infractions in places where so much money is exchanged. In Biloxi, these two types of crime account for around 87.5% of all arrests in the city, and over 65% in the other top five cities. However, recent trends show that, while overall crime is decreasing, larceny rates for those arrested over the age of 18 have increased by over 9% over the past five years.

Other crimes, despite their low volume, are disproportionately prevalent in certain cities. Motor vehicle theft is extremely rare in Atlantic City, accounting for only about 2% of all crimes in the city. Although there are a variety of factors at play, the city's shortage of parking is a good bet. Atlantic City is by far the smallest (10.75 square miles) of the casino destinations we reported on. The city of Las Vegas, on the other hand, has more than three times the number of rape arrests as cities outside the state of Nevada; its in-state neighbour, Reno, has the greatest rate of rapes.

So, what exactly is the link between casinos and crime? Only two of the five gambling towns we investigated made the list of the 100 most hazardous cities in the United States, those were Atlantic City at No. 21 and New Orleans at No. 70. Still, looking for the kind of thrills that only a combination of criminal masterminds and casinos can provide? Because you're more likely to watch a crime committed in Gary, Indiana, than in Las Vegas, Nevada, you should probably rent "Ocean's Eleven" or another casino heist movie and settle in with some popcorn.

The results were visualized by comparing the crime data from the FBI sourced in 2014. We only collected data for some of the major casino cities in the US.

The results of the study came from factual data and were used to give readers a sense of the crime rates in major casino cities. The CasinoTop team wants to ensure that everyone is made aware of the concerning issues that can be addressed for everyone to comfortably enjoy the casino cities of their choice. Feel free to share any of the collected data and graphics to better the future experiences for gamblers everywhere.