In the past, sports were always dominated by a male presence. However, times are changing and the face of sports is changing along with it. More and more women have become interested in watching and playing sports and have even pushed the boundaries to become owners of professional sports leagues around the world.

Our team at CasinoTop were interested to find out what sports women enjoy watching and if they are treated with respect in the fanbase. We also wanted to find out just how big the female fanbase was. To do that, our team set out to survey 1,000 female sports fans to bring you the data to answer any questions you may have.

There has been an uptick in women in the sports industry taking the reins in sports leagues. In 2019, singer and rapper Ciara announced that she became the part-owner of the soccer team, the Seattle Sounders. While there aren’t many, there are some notable sports team owners. These include Norma Hunt with the Kansas City Chiefs, Jeanie Buss with the Los Angeles Lakers, Renee Montgomery with the WNBA’s Atlanta Dream and Virginia Halas McCaskey with the Chicago Bears to name a few.

When looking into the favourite players and teams from a female fan’s perspective, here is what we found. 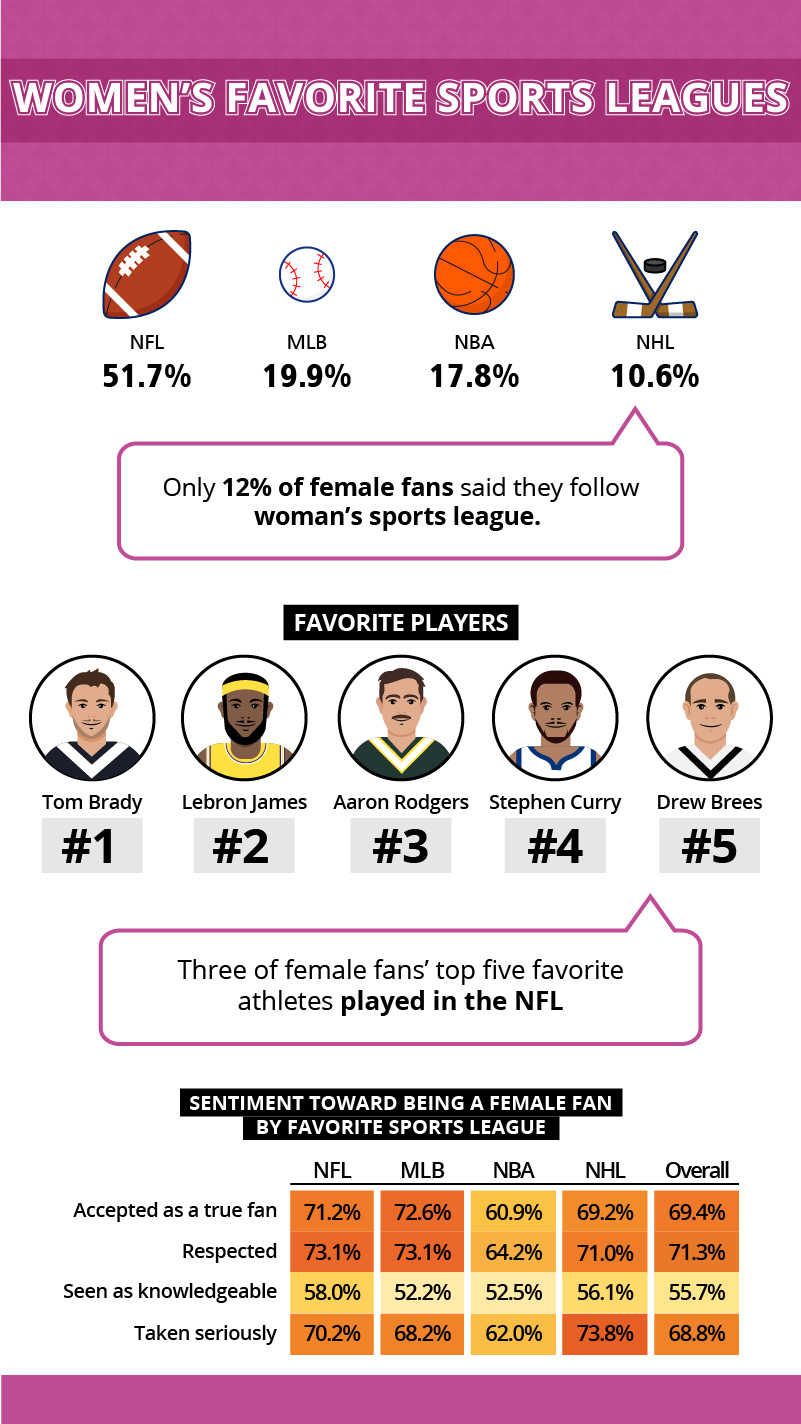 While not the most popular, Major League Soccer (MLS) has shown some growth in recent years. The other statistics show that about 10% of female fans supported hockey, a good 17.8% were fans of the NBA and while one in five women supported the MLB. The greatest support of a major league sport was the NFL of which had the support of 52% of the women surveyed. According to news reports, there has also been major female investment in the National Women's Soccer League (NWSL) with names such as Serena Williams, Naomi Osaka, Abby Wambach, Jennifer Garner and more showing keen interest in investing in the league.

A study from 2019, showed that the FIFA Women’s World Cup, broke records when it came to the numbers in viewership. However, the latest study showed that around 12% of female fans are dedicated to following women’s sports leagues. As shown in the results, the top five favourite players were all male athletes, for now.

While playing on the field or the court is exciting, serious and as intense for female players as it is for male players, there are times when female fans have experienced harassment while trying to enjoy a game. The results show that about 23% of our female sports fan base have been harassed at varying sports events. Harassment occurring at a football event was shown to be more likely to occur than any other major sports league. 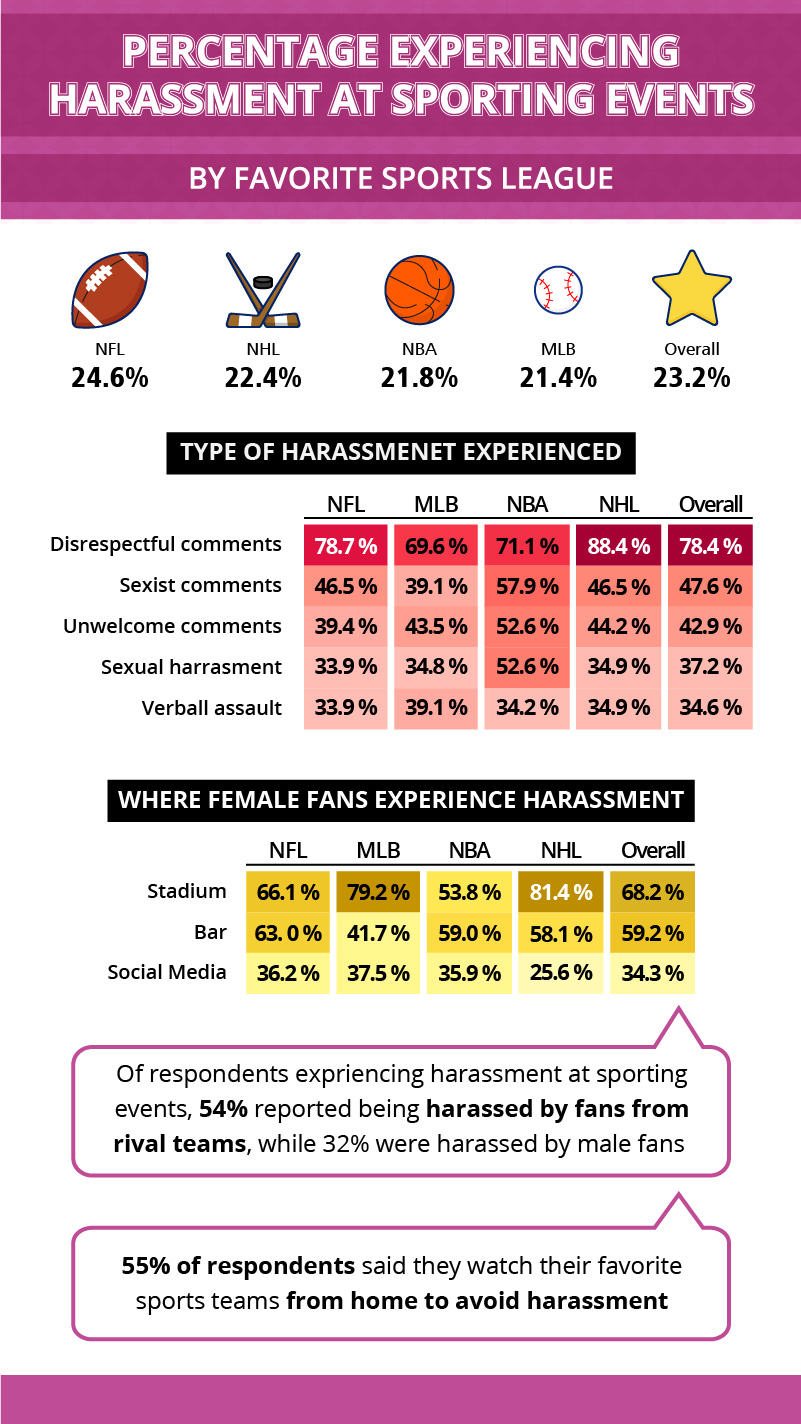 Breaking these numbers down even further, showed that at stadiums while trying to enjoy the game, female fans (68.2%) were subjected to harassment more than they experienced at bars (59.2%), while 34.3% of women have also reported harassment on social media platforms. Fans of the NFL reported that the social harassment figure on social media came up to 36% while the figure came in at 81.4% of women supporting the MLB have had to deal with unwanted attention and conduct at stadiums.

Many factors lead to the makings of a sports fan and one of the most important factors is respect. Sports fans are also known to follow specific sports for their home team pride, honour, sports betting and more. Our survey included questions about respect as well as game and team knowledge. The findings also showed that about 20% of the women in the survey reported that they have been called “fake fans” at one point or another. 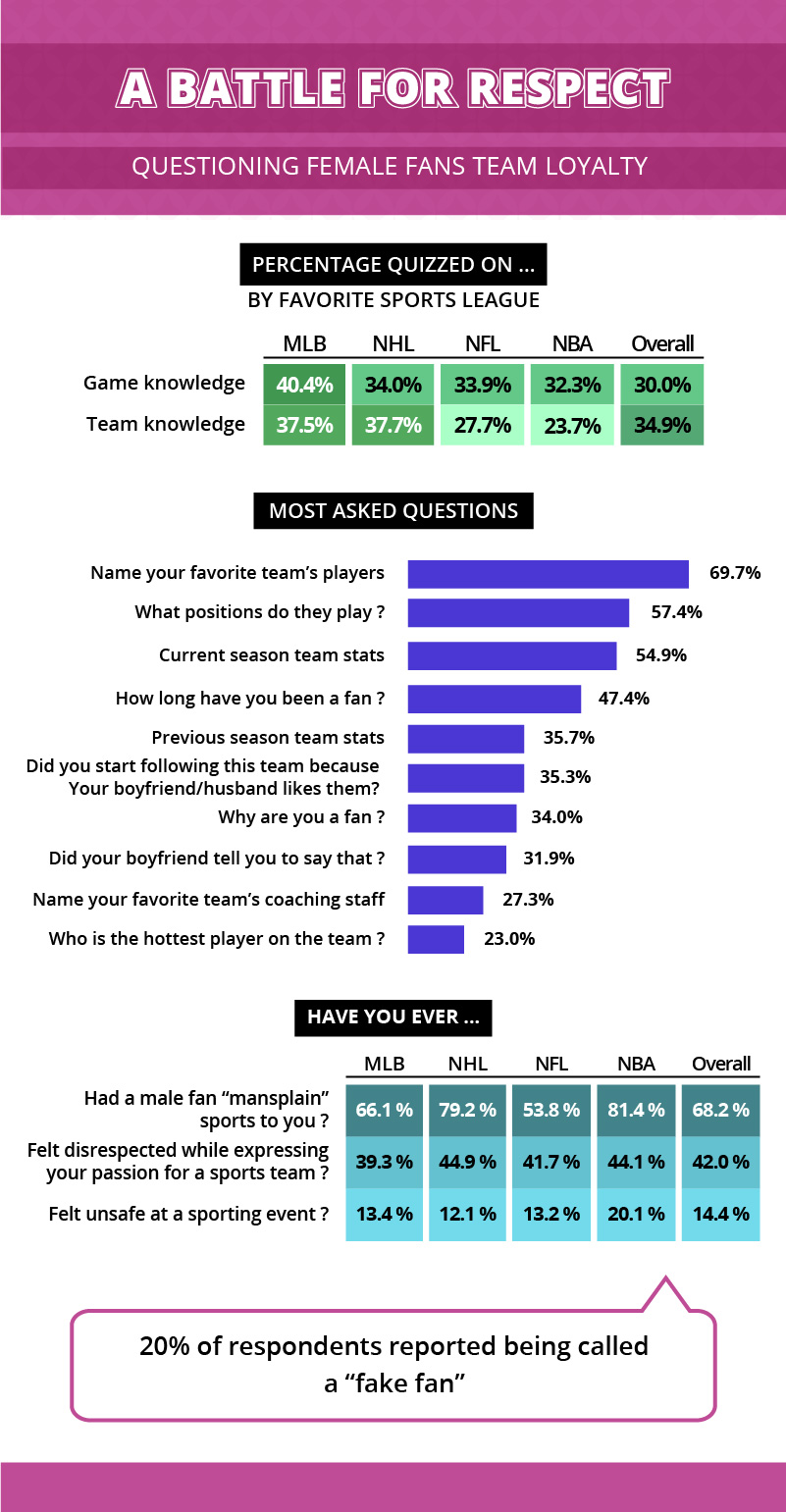 The results showed that 70% of the women were able to name their favourite sports players from any league. Additionally, 57.4% of female fans were able to identify their favourite players’ positions and 54.9% of women could provide the players’ season stats. It was also found that 37.7% of the NHL female fans were most likely to be quizzed on their knowledge related to the teams they support. Similarly, 40.4% of female fans of the MLB were likely to be questioned on how well they understood the game.

It is well-known that the sports industry around the world is a male-dominated one and has been this way for the longest time. This study has shown some interesting results, but all over the world more and more women are upfront about how much they enjoy watching sports. These female fans engage in the sports they love with great passion and just like any other supporter, engage in sports on social media, at bars and live at the stadium in the stands. Even though there has been progress and more inclusion of women in sports culture, the evidence shows that female fans are more likely to cheer for their teams and players from home.

The fear of harassment at a stadium or bar is still evident and that’s why a safer space will likely be the preferred choice. There are so many female fans and the number grows with time. The major leagues’ inclusion of women has grown over the past few years and will continue to grow. So, there is definitely a need for safer spaces for female fans to comfortably enjoy the sports they love.

This survey consisted of subjects or respondents aged between 23 and 60. The average age of all respondents was calculated to be 37 with a standard deviation of 10. Outliers were removed for open-ended questions to receive definitive answers. The respondents were also required to correctly answer a question which was for an attention check, to ensure that the survey was taken seriously.

Overall, there were about 1,000 female fans surveyed who supported at least one of the four US major league sports. Namely, NHL, NFL, NBA and MLB. The questions the respondents needed to answer in the survey were required to do so based on their personal experiences.

The data that was extrapolated was based on self-reporting by the subjects of the survey and are exploratory. When analyzing results from a survey based on self-reported responses, the issues include but are not limited to bias, attribution, selective memory and telescoping. All values included in the study are based solely on estimation.

The survey on how female sports fans are treated during sports events and how they perceive different sports was done to find out about their experiences. The CasinoTop team wants to ensure that everyone is made aware of the concerning issues that can be addressed for everyone to comfortably enjoy the game of their choice. Feel free to share any of the collected data and graphics to better the future experiences for female sports fans.