An Overview of the NFL Draft

An Overview of the NFL Draft

The National Football League is one of the most prestigious and elite professional sports leagues in the US. To ensure that all the teams in the league are afforded the chance to make it to the top and to stay in the league, the NFL draft was created. The draft happens every year and players are selected in reverse order of their placement in the previous year’s football season. Even though a team is struggling, each year they have an opportunity to replenish their ranks to add more vigour to their team in preparation for the next NFL season. The drafting process is thorough and even players who are considered the best of the best sometimes don’t cut.

Our team at CasinoTop have done their best to bring you as much information about the NFL draft. That ensures that when you see it happen the next time, you know what teams are looking for when building their ranks for the next season. When looking back, there are decades of data from previous NFL drafts to draw on. The data can be used to determine the draft value of players based on their careers. We can also see how the players performed based on their position in the draft.

For example, when analyzing the data we found that one of the lowest value picks in the draft ever. When drafting players, teams never really know their potential and usually hope for the best. In 1998, Ryan Leaf was drafted for the Chargers and he was the No. 2 pick overall. It turned out that Leaf underperformed and did not meet expectations in 1998 and even missed the following year’s season due to an injury. In 2001, Leaf dropped out of the NFL and eventually found himself in trouble with the law, ending up in prison.

On the other hand, when it came to the 2000 NFL draft, the Patriots found a player that would go on to work wonders and he held the 199th position overall. It was during this NFL draft that Tom Brady became the overall pick. Brady is well-known for being a late-round quarterback and earned his keep on the team on the front line. With Brady on the team, the Patriots went on to have appearances in the Super Bowl six times which included four wins along with MVP honours three times.

There is a key difference between draft position and draft value and the examples above prove that. Instances like these have led our team to find out more about how well teams and players have weighed their options and made their choices. The data that was analyzed included information going as far back as the first-ever NFL draft in 1960.

The Value of a Draft Pick 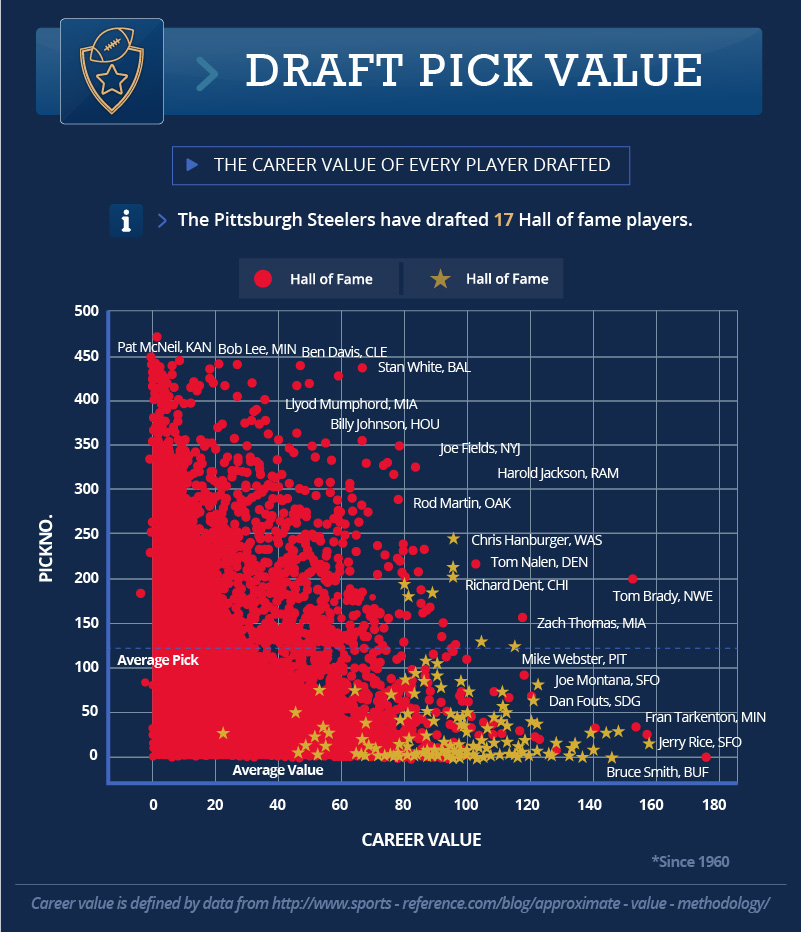 The graph above illustrates how difficult it is to forecast future performance. Elite players are almost exclusively selected in the first few rounds, creating a strong incentive among teams to obtain a draft position early. However, for every truly excellent player who makes it to the early rounds, there are a slew of others who never come through. For a franchise that is already failing to compete in the league, drafting a first-round failure is a major setback.

On the other hand, drafting future Hall of Famers is usually profitable. Outliers who are far above and to the right of the group are frequently where the biggest victories are found. Chris Hanburger, who was drafted 245th overall in 1965 and led his club to a Super Bowl trip in 1972, is the most recent overall draft pick to be inducted into the Hall of Fame. Tom Brady, as well as Zach Thomas, Harold Jackson, and Stan White, are among the other renowned names on the list. Each of these players put in a performance that was far above average for his draft position.

Best Teams Based on Position 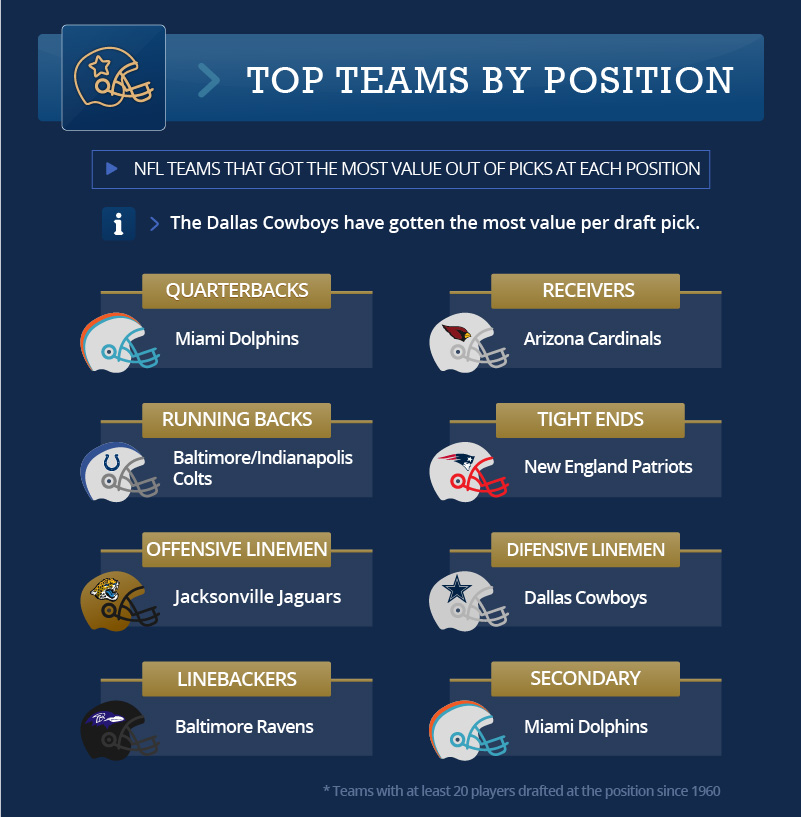 The teams that go into the NFL draft don’t all perform at the same level. This is especially true when it comes down to the wire and the best players are chosen for key positions. Through our research, we found that the following teams managed to get some of the top draft values since the first NFL draft. Here are some of the highlights: 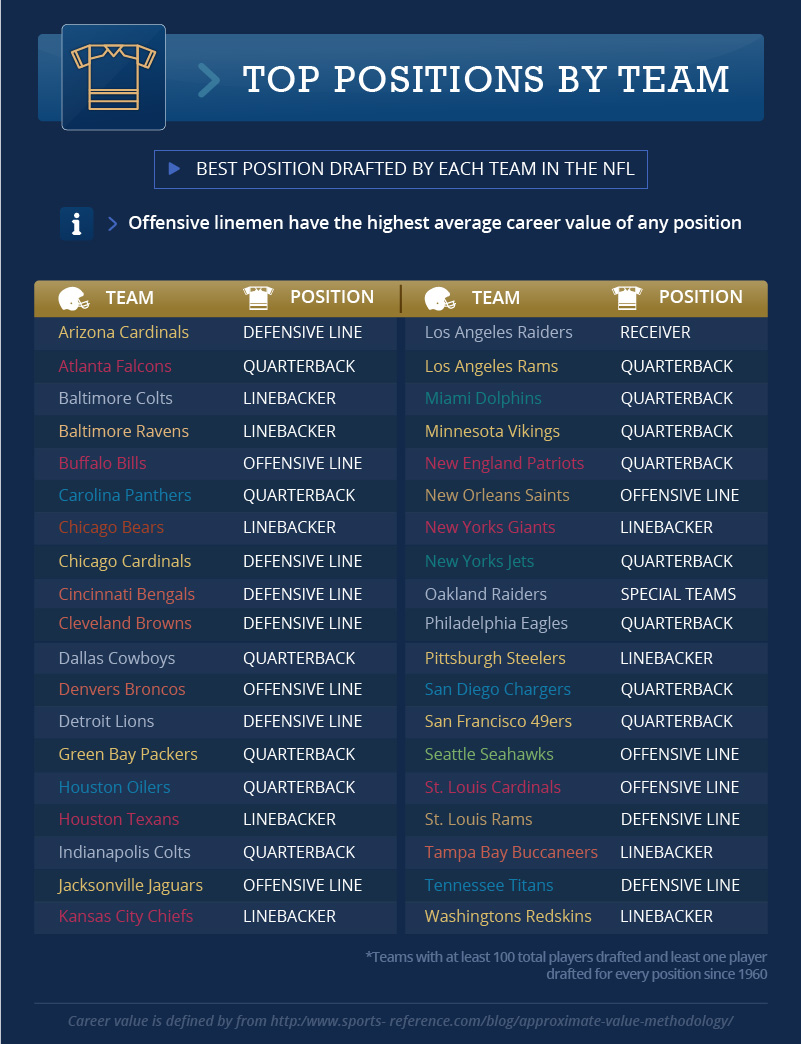 In some positions, overachievers are easier to locate than in others. For many teams, the offensive and defensive lines, as well as the quarterback position, produce the best outcomes. The Raiders are unique in that they are the only team with the most valued special teams and receiving draft picks (Los Angeles and Oakland). The Raiders have not drafted any of their other star quarterbacks except Ken Stabler. 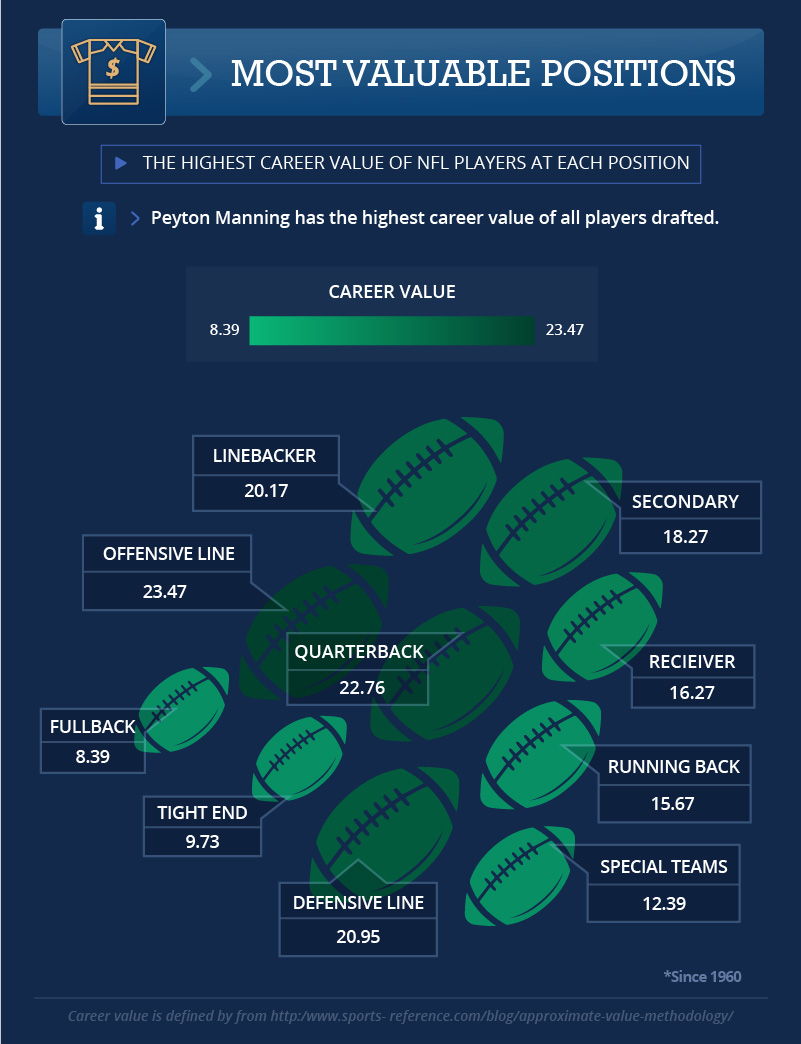 Before the start of the draft process, teams have the option to inspect the draft roster. This helps companies to predict which players will be available when it's their turn to pick and develop a drafting plan. What should teams do if they have multiple essential roles to fill and only have two or three high-ranking individuals to pick from? The quarterback position has always been filled first, followed by the offensive and defensive lines. We also found that the worst picks are fullbacks and tight ends, who return less than half the value of many other positions.

College Programs Adding the Most Value 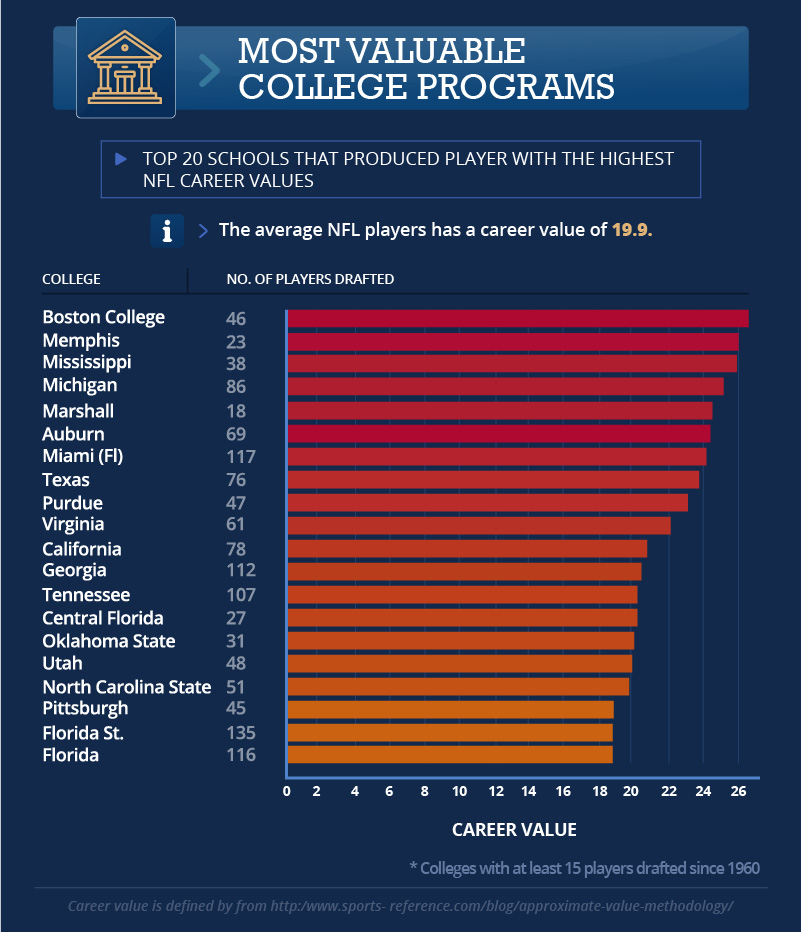 Thousands of collegiate football players compete each year in the NCAA to represent their school. A lucky few's efforts are good enough to attract the attention of NFL scouts, which can lead to a career in the NFL. Since college teams are the primary source for new talent, it's important looking into which schools produce the finest pros.

The schools on this list are well-known to most NFL fans. Their alumni can be found on all of the league's teams. The Seminoles, Gators, and Hurricanes (all from Florida) claim first place in terms of quantity. Boston College is the best in terms of quality, with an average NFL career value that is roughly 30% more than the league average.

Value in the First Round 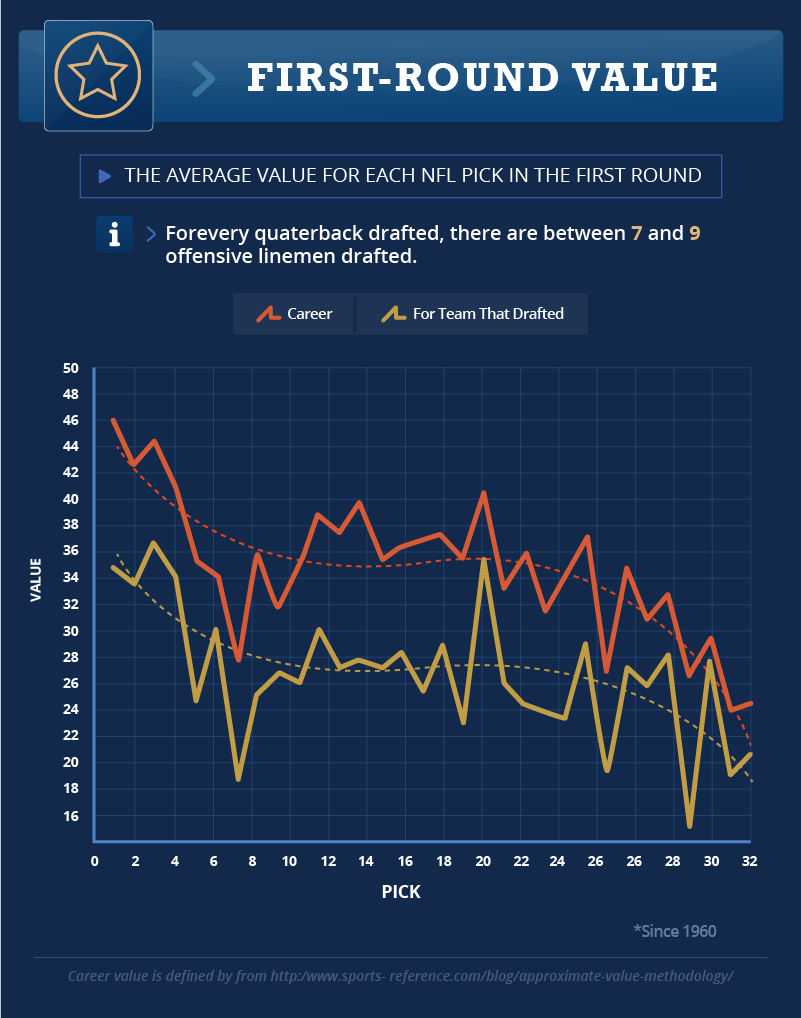 Each round of the NFL draft currently has 32 players taken on, one for each franchise. Is a team's draft order that important when there are so many talented athletes available in the first round? In a word, yeah. According to the research, clubs negotiating draft positions offer roughly the same value to picks 12-20 and exponentially higher or lower prices to picks near the start or conclusion of the round.

Average Value of a player Per Team 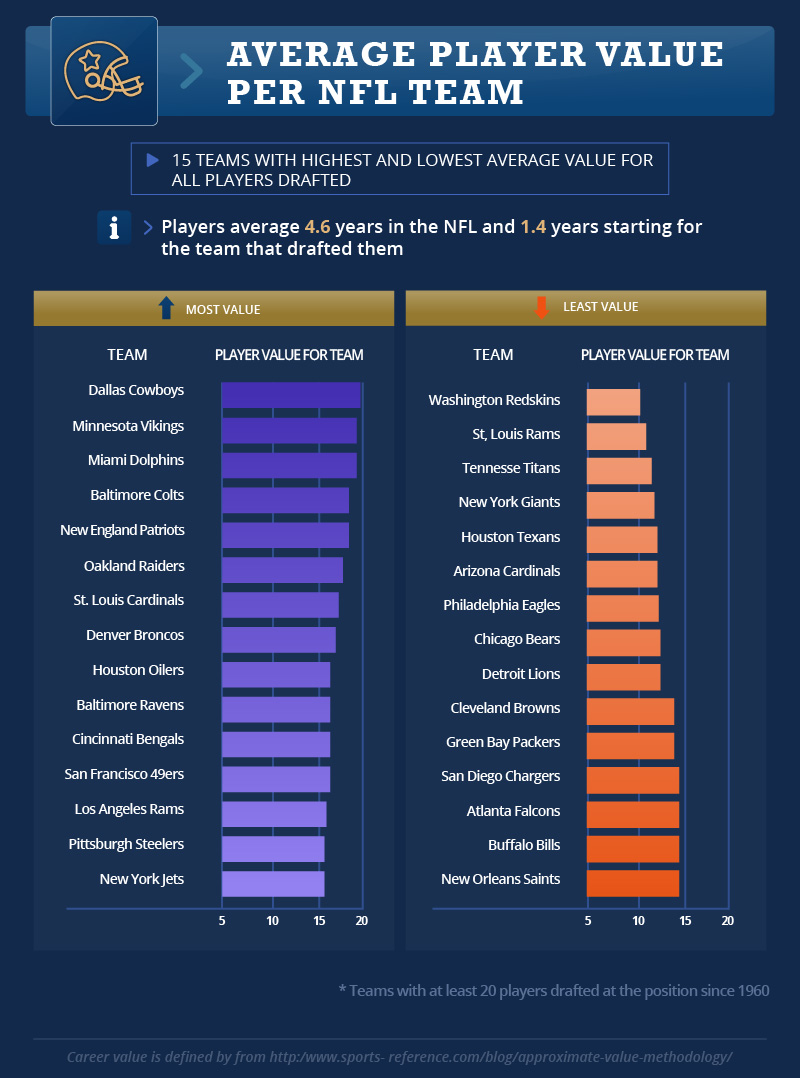 On average, a player will only start for the team that drafted them for 1.4 years. As a result, it's critical to draft with precision year after year. This concept results in a consistent stream of high-quality rookies who can serve key positions for their teams and, hopefully, develop into all-stars that stay with the team for a long time. Nobody does it better than the Cowboys, Dolphins and Vikings when it comes to consistency. The Redskins are at the bottom of the list, holding the record for the worst draft quality of all time.

It was interesting to look at the 2014 NFL draft and see what type of value the newcomers brought to their new teams. The Cowboys' Zack Martin was the most valuable draft pick of the year, followed by the Ravens' C.J. Mosley. Corey Linsley of the Packers and Zach Fulton of the Chiefs both had outstanding seasons as late-round picks.

However, not all of the teams did so well. The Texans' No. 1 overall pick, Jadeveon Clowney, is out for the season, while the Lions' No. 10 pick, Eric Ebron, has missed numerous games due to hamstring ailments. After exchanging two first-round picks to get Cody Latimer late in the second round, the Broncos' draft value plummeted after Latimer underperformed expectations in 2014.

The Value of the Annual NFL Draft

For die-hard NFL fans, the draft is something to look forward to with bated breath. It's not only about clubs selecting one of the year's biggest names; such decisions are self-evident. Fans and teams will find the top players vying for slots behind the scenes. The unexpected picks that prove themselves above all else are the diamonds in the rough. Fans will be left with the hope that one of their team's new rookies will blossom into something exceptional once the dust has settled and the pundits have all gone home. The NFL draft is a once-in-a-lifetime event because of the possibility for stars to emerge from the most unexpected of picks.

Since 1960, we've compiled draft data for every NFL draft. We looked at every pick, position, and team in the NFL since 1960 using approximate player and career values by the franchise. Multiple characteristics were taken into account, and each player's finest season was weighted somewhat more than the others. Because many accomplishments and attempts never made it to the stat sheet, the approximate value is not an end-all-be-all score for the greatest players in history. For more information, go here.

The use of the information on this page is free to publish and distribute as you see fit, for noncommercial use. The only request our team at CasinoTop have is that you link back to this page for the authors and contributors to be rightly credited for their work.