Getting to Know The Rules of Keno

Playing Keno is great fun and many online casino players enjoy the simplicity it brings to the online gaming experience. Many online casinos offer keno in their selection of games in Canada. Our team of experts have brought together everything you need to know about keno.
This guide will help you hone your keno skills, know what to look out for and how to maximize your winning potential. We have played many keno games on various reputable online casinos and have compiled only the best advice for you to enjoy and win when playing this lottery game of chance. 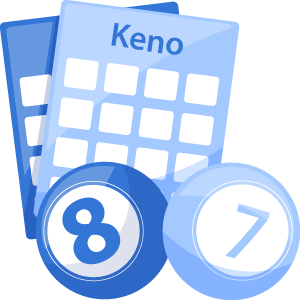 Keno: What is it?

A game like a lottery where numbers are chosen and the outcome is determined by a random number draw. The aim is to have your selected numbers match the numbers that were drawn.

The Keno Card: What You Need To Know

Players pick numbers between 1 and 80. These numbers are arranged in rows and columns. For certain games, there is a limit on how many numbers you can choose from your keno card.

Balls will be drawn randomly and the system calculates a player’s winnings based on how many numbers on the Keno card match and the amount that the player decided to bet.

A machine will draw 20 balls with numbers displayed on them. This machine is called a hopper. 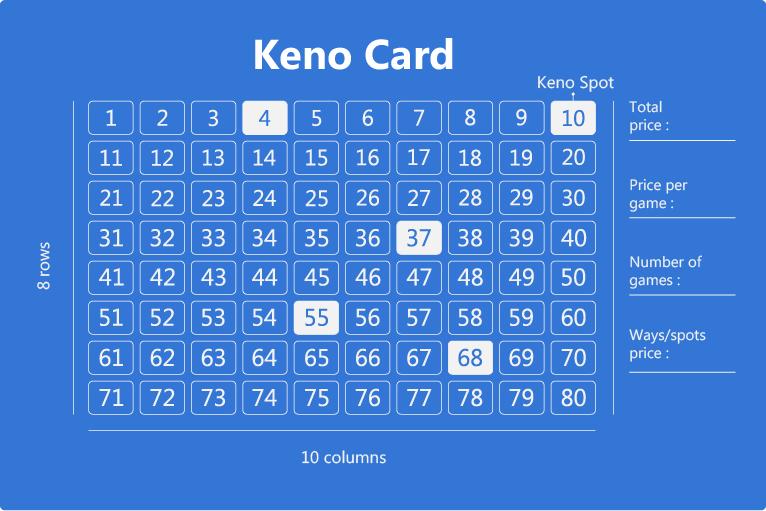 Keno Spot: What is it?

There are two ways to define this term when it comes to Keno. The first refers to the name given to the traditional variant of the game that only depends on the numbers chosen and the numbers drawn. There are no extra features. Furthermore, in other variants of Keno, a Keno spot is used to describe the numbers that the player chose on the keno card.

Before any draws take place, players will choose from the numbers 1-80 displayed on their Keno card.

1. The individual numbers represented on the keno card, each of them is called a keno spot.

2. With online Keno, as you select your numbers a table with payout totals will appear on the right side of the Keno card.

3. Simply put, the more numbers you have that match the numbers that were drawn, the more you stand to win. In some variants, if you don’t match any of the numbers and you select numbers above a specific amount, then you will also be rewarded. 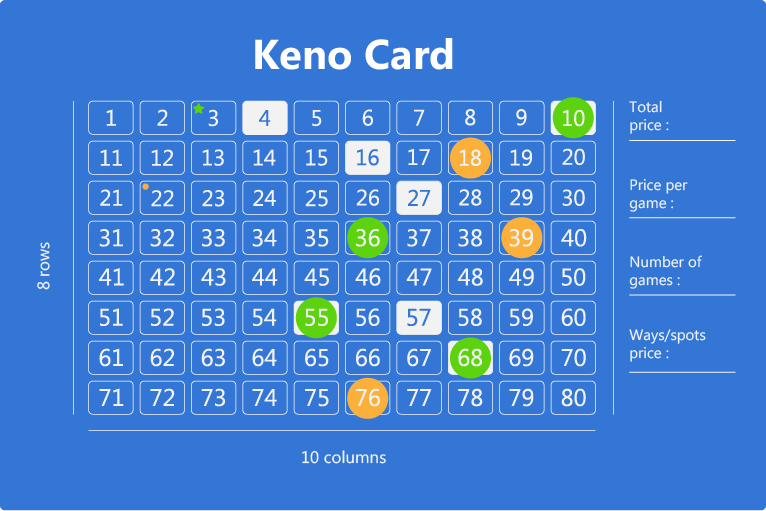 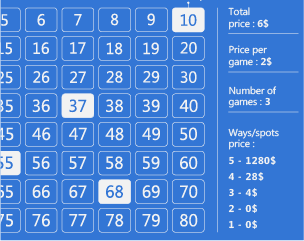 5. Once numbers are chosen on the Keno card, then the numbers that were randomly selected will appear on the screen. Check if you have matched any of the numbers. 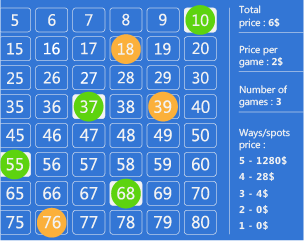 6. As the numbers appear on screen, if you match numbers being drawn then your winning numbers will light up in some way. These are called a catch or a match.

7. For Keno, different types of bets can be selected or played out. So, make sure you understand how the bet works.

Picking Numbers on the Keno Card

Online Keno gives players options as to how they pick their numbers. While players can choose themselves, they can also decide to use the quick pick offer.

This is automated and makes the game truly random as the player and the software brings out random numbers that could match each other. This adds even more convenience to a player’s gaming experience.

Find the option on the Keno card to select how many numbers you want to cover.

Select the random button and the fun begins. 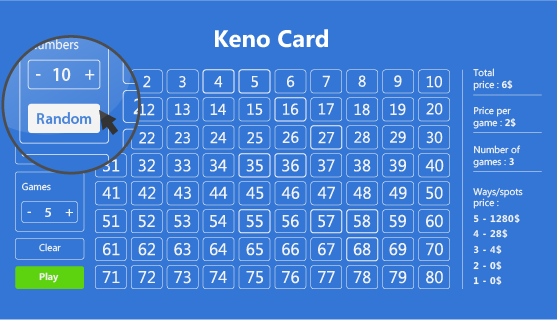 The numbers selected by the computer will be displayed on the card. 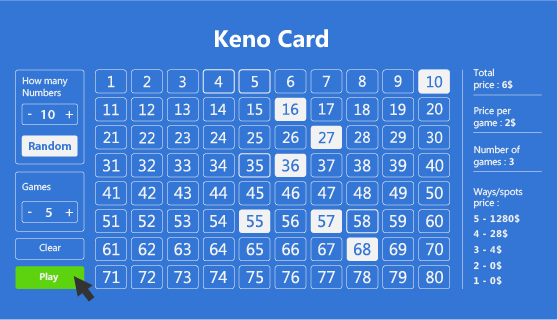 You have the numbers you want to play with, so now it is time to start playing the game to see how many numbers you have managed to match. 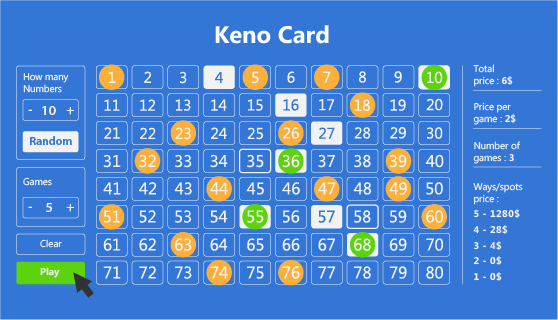 This is optional. You can play again with the numbers that were just randomly selected or you can start at the beginning and have the computer choose new numbers. 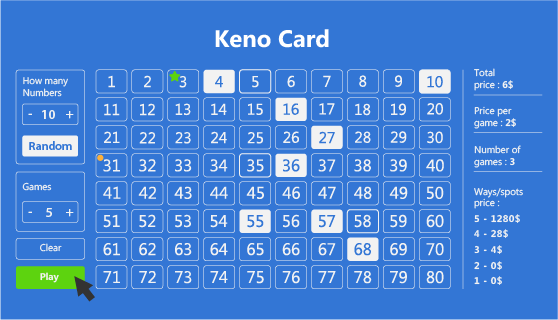 Many players have specific numbers they want to play. Picking your own numbers instead of using the randomly chosen ones gives players a feeling of control. Additionally, this is the way that the original game is played.

Choose how many numbers you want to play with on the Keno card.

Take a look at the range of payouts depending on how many numbers you match on the screen. 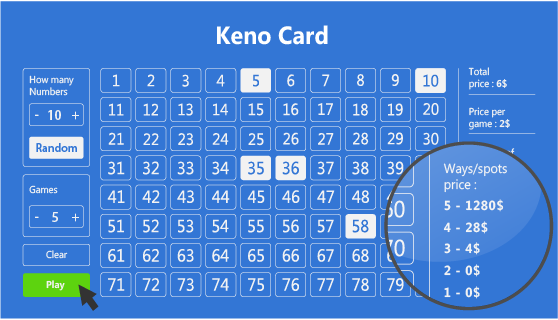 Choose how much you would like to bet for each game you play. 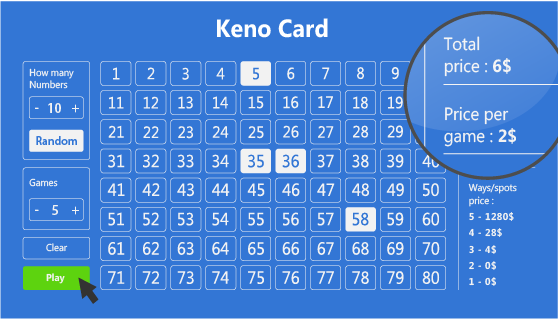 You have your numbers, you have seen your payout range and placed a bet. Now, hit play and see how many numbers you match. 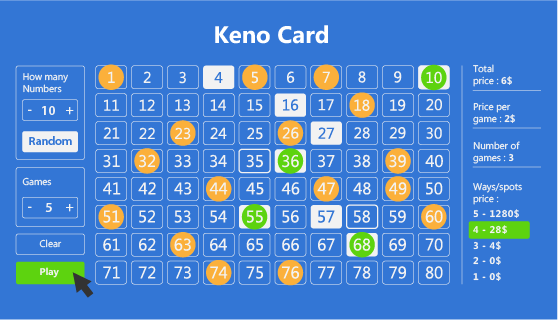 Once again, you can use the same numbers for the next game or select new ones. 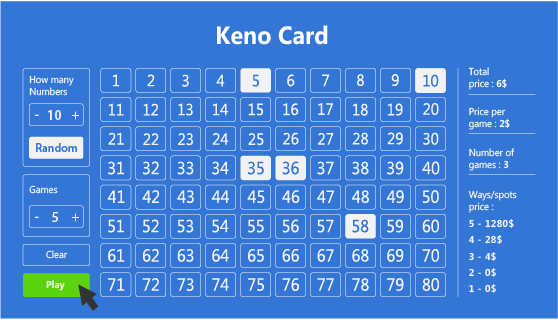 Keno at a Local Casino Vs. Online Keno

Keno is a game played by those looking to relax and can be enjoyed at your local land-based casino as well as your favourite online casino. However, each of these venues has its pros and cons. Let’s stack them up and see how they compare.

Keno at a Land-Based Casino

Live entertainment at a casino while choosing your keno spots
Additional casino benefits such as bonuses or complimentary meals or drinks.
A wide variety of variants available to play
Common keno etiquette needs to be studied and practised
The game moves at a slow pace
vs

Keno at an Online Casino

The Keno Draw: How it Works

The major action in the game happens when the numbers being drawn are revealed. The moment right before a player chooses to start the draw is an exciting one. You have taken care and chosen your numbers or used the quick pick. Here is what happens around the Keno draw.

To start, the keno card is presented and players take their time to choose the numbers they wish to play with. Some players may even rush through it as they use the same numbers all the time. 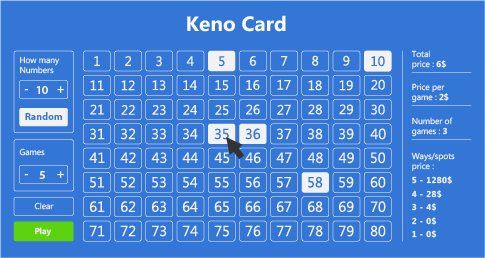 Option to Add Side Bets

Some variants have added features such as multipliers or side best to maximize the payout. This is the time for them to do so before moving on. 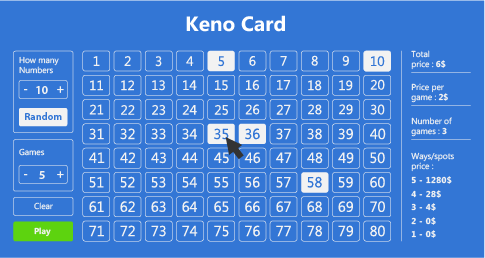 After the play button is selected the numbers start to be drawn at random and will indicate which numbers match what the player has selected on the Keno card. 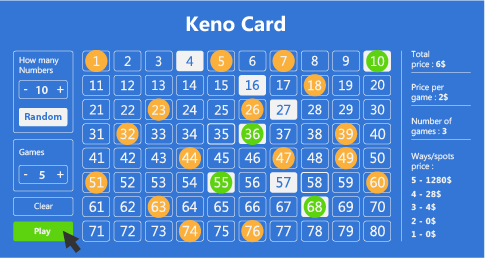 If you are not done playing you can move on to the next round where you can pick new numbers or use the same numbers from the previous round. 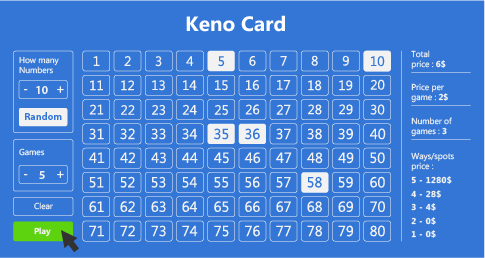 The Different Bets in Keno

Taking some time to sit and play a relaxing game like Keno is a good decision if you were looking for something simple. However, there are different types of bets that you can place and understanding them will help you play more competitively and make it seem like more of a challenge. Here are the main types of bets for Keno:

A raw bet that follows the simplest rule of Keno. Choose up to 15 numbers in any way or form for a single game.

Players choose more odd or even numbers on the Keno card depending on what type of number they expect during the draw.

An advanced bet where players group sets of numbers. Numbers are then chosen from within these groupings as the games go on, until all numbers in the separate groupings have been played.

Players will bet on two cards or two sets of numbers and these are treated as two separate cards and bets during a single game.

As the name suggests this way of betting involves a combination of split and way bets on a single Keno card.

Used in conjunction with split or way bets, where each ticket must have the same number selected.

There are similarities between Bingo and Keno that can’t be ignored, however, these are two completely different games when you look at them in detail. 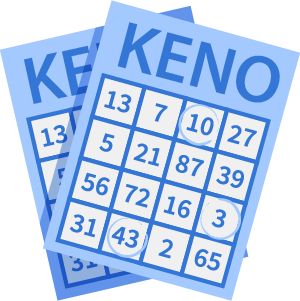 Players have a full set of numbers and have to choose which numbers they deem to be lucky. Keno is more similar to a lottery than it is to Bingo. Numbers are drawn after numbers on the Keno card have been chosen by the player. 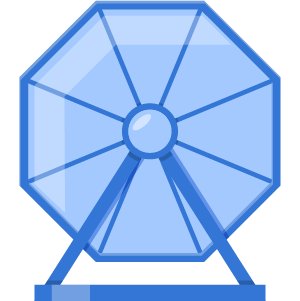 A Bingo card displays non-consecutive numbers. Printed randomly and the numbers are marked as the draw is happening. When a number is announced and the player has the number on their card, it will be circled or marked.

The thing that the two have in common is that they both have cards with numbers on it and winning depends on which numbers are drawn. Bingo is more random whereas Keno is a game where decisions are made and then the outcome is presented.

All Set to Play Online Keno

Keno is a relaxing game that als allows for a bit of a challenge. While the numbers drawn are completely random, control lies in the numbers chosen by the player. Additionally strategies can be used to bet on number patterns or groupings which makes it even more interesting to play. Compared to other casino games you find at an online casino, it is played at a slower pace, so you can take as much time as you need while selecting your numbers.

To play Keno online, our team of gaming experts have selected the best online casino that you can access and play Keno on. Check out the list of recommended online casinos that offer Keno. We only recommend the best online casinos that have great customer support, are safe to play at and have been rated for their fairness as well. Make sure to look out for some great bonuses, promotions, side bets and any special offerings when it comes to playing Keno online.

✅ Can I play Keno at an online casino in Canada?

Yes! There are plenty of online casinos that offer Keno which is provided by some of the best software developers in the online casino industry.

✅ What type of odds can I expect when I play Keno?

A Keno card has 80 numbers on it and it all depends on how many numbers you choose on the card. The odds and payouts are reflected next to the Keno card when you play online, and as you select your numbers and place your bets, these will change to show what your payout and odds are.

✅ How many numbers can I choose on a Keno card?

For most Keno games you can choose up to 15 numbers. You don’t have to choose the maximum amount of numbers.

✅ Can I play Keno on my smartphone?

Yes! The game is quite simple and you shouldn’t have any trouble accessing a Keno game on a range of mobile devices.

It is a game of chance and it all depends on which numbers match the ones that are drawn. All the research in the world will not affect the random nature of the game.