5 Super Sevens Fruits is the new slot game by Playson, which has 5 reels and 5 paylines. The slot game offers 5x3 reels and pays out, dependent on the combinations that the icons fall on. It has an inviting theme that’s reminiscent of the old school classics which is sure to entice both experienced and new players. Let’s see what else it has to offer.

In the game, there will be a coin denominator, which you can use to decide how much you want to be. The +/- allows you to add or subtract from the amount.

Thereafter, you have to click on the spin option to get the game started.

The game’s autoplay feature can then be used if you get tired of having to bet manually.

The game has a very classic look to it and because the developer has many other slots, the theme that they use is rather standard. The symbols are also mostly the same. Some symbols in the game feature the Seven, Watermelon, Stars, Grape, Orange, Plum, Lemon and Cherries characters that make up the combinations when playing the game. The fruits when they land on the reels, in certain combinations, will generate a winning spin. The betting range for this particular slot is 0,10-100.

5 Super Sevens Fruits has 5 active reels. What that means is that the seven symbols is a determining symbol and gets you a winning spin, as long as there are three of them in a line. That means, even if the seven symbol lands in the middle reel and has one adjacent but in the same line, that the game will still generate a prize for the player. The game also is designed in such a way that combinations can be completed, from the left or the right of the slot machine.

The payouts for 5 Super Sevens Fruits is dependent on how much you bet. The higher your bet, the bigger your payout will be. This game is accessible on mobile devices as well. The classic design of the game means that many people will feel comfortable playing it. The machine offers 5x3 lines and the combination can fall on any of them to make up a successful spin. The slot does not have any progressive jackpots. The game can be played at Playson casino for free or for real money. 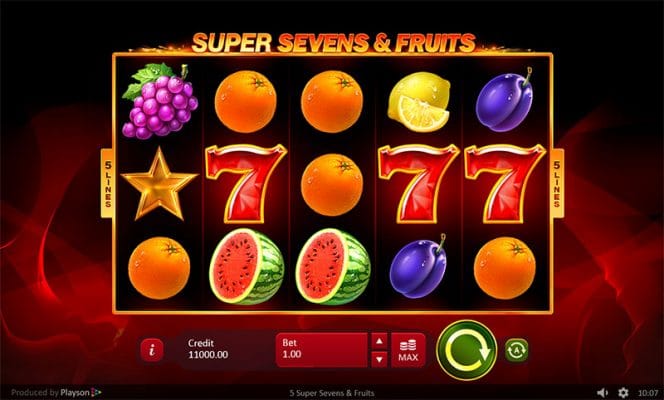