Absolootly Mad Mega Moolah slot developed by Microgaming and Triple Edge Studios has grabbed the attention of many players with its unique design and enticing features. Absolootly Mad Mega Moolah slots’ immersive features and fun elements keep players wanting to return for more. Let's have a look at all the features of this exciting new slot game.

Absolootly Mad Mega Moolah is a 5x3 reel slot which is also a 243 ways to win slot. The objective is to try to match up at least 3 symbols in order to win and the more symbols are matched, the higher the winnings. After each time you win on the reels, the amount of the multiplier will increase every time you earn a match consecutively with up to x5.

Each player will have a certain amount of credits based on the amount they bought and from those credits you can choose to increase bets or maximise the bet.

The slot presents itself in an ‘Alice in Wonderland’ type design with the Mad-Hatter being the main focus of this story. The symbols each represent something from Alice in Wonderland such as Cheshire cat, The White Rabbit and the four suits. The design is simple, but there are some extra details which make it aesthetically pleasing. The standard soundtrack has a mysterious yet magical feel which perfectly suits the theme of the game. Coins start to rattle as the Mad Hatter yells ‘Big Win’ whenever the player starts to win substantial amounts.

Absolootly Mad Mega Moolah is well known for its Wild symbols which is the most important one in the slot. It serves as a standard Wild, however, it has extra features such as using it as an extra scatter symbol in order to trigger the free spins feature. However, it has a more important role to play which will be that each of the Wilds you land is collected in the Golden Teapot. The more coins that are collected before triggering the next Rolling Reels Bonus would give you a better chance at the four Mega Moolah jackpot prizes which will be found on the Jackpot Bonus Wheel.

Absolootly Mad Mega Moolah has a Rolling Reels feature which can give you up to x5 multiplier with continuous wins. In the free spins feature, the multiplier can reach up to x15.

Absolootly Mad Mega Moolah slot uses simple game mechanics making it easier for the player. After the fourth spin any player can get the basic understanding of what’s happening. The playful design and the theme of Wonderland make it a pleasure to play. The simple mechanics makes it easy and enjoyable to play regardless of what level of gaming experience you have. Microgaming and Triple Edge Studios have proven their worth as they have released many popular slot games such as Playboy Gold and Halloween. 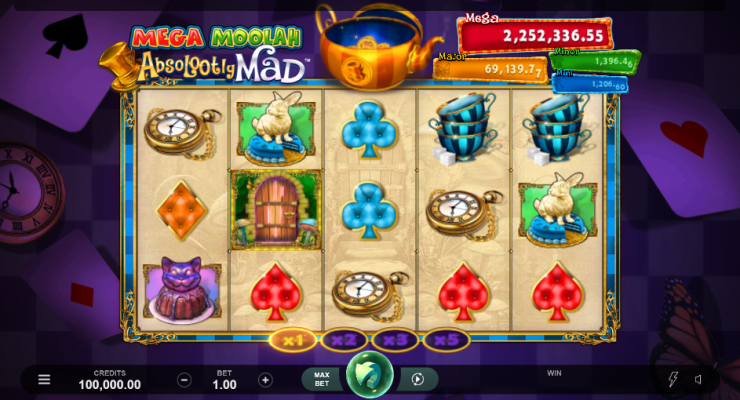