If you want to capture the spirit of Oktoberfest in the comfort of your home then Beers on Reels slot is the game for you. This five-reel slot features 40 paylines and was developed by Kalamba. Aside from the high volatility, this slot also features a bonus round and free spins.

How to Play Beers on Reels Slot

To ensure that you have the most fun playing, you’ll need to understand the mechanics of the game:

Beers on Reels has a stereotypical Bavarian design that features a variety of common elements from the German culture. This includes beer, pretzels, bratwurst, accordions, and beer barrels. The general theme is similar to that of a tavern, with beer taps on top of both ends and the middle reels. The colour scheme is brown, bronze, and black, with the orange beer and gold coins adding plenty of contrast to the reels.

The soundtrack is our favourite part, as it features a classic tune played by an accordion. This creates the perfect ambiance as it ties in very well with the rest of the theme. 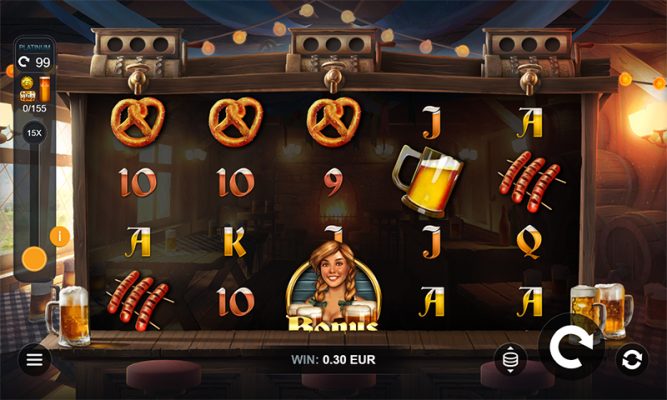 Beers on Reels has missions, this sees you trying to collect particular symbols over a set amount of spins. Missions are available in four types, bronze, silver, gold, and platinum, each providing its reward. Another great feature of this game is the Wild Column, this will remain on the screen until the gold coins above the beer taps disappear.

The scatter symbols are available in the form of a waitress that will only appear on the third column. This will give you free spins in the form of a bonus game along with a cash prize that’s three times the amount of the initial wager.

Beers on Reels is one of the best Oktoberfest themed slots on the net right now. It manages to effectively capture the essence of the festival without diving too deep into common stereotypes. Kalamba has done an outstanding job by incorporating unique features into the slot game which will attract plenty of slot fans that also enjoy beer.

Overall, the great combination of simple game mechanics, decent stats, and beautiful aesthetics makes this game stand out from the rest.

Recommended Casinos for Beers on Reels