Red Tiger Gaming’s Bombuster slot was released in August 2020 and it’s likely to be one of the most unique slots we’ve ever played. The cascade style slot features a 7x7 reel design with a cluster pay system. The slot also has a retro-futuristic design that incorporates bright colours and a hyperspace background.

How to Play Bombuster Slot

Before you get started with blowing things up, you’ll need to understand how the game works:

Bombuster has a design that’s reminiscent of the old minesweeper game that came with Windows XP. The 7x7 design works well and the vibrant colors that are seen on the symbols provide an excellent contrast to the soft hue that glows in the cyberspace background. Essentially, it’s a very minimalistic design that has a variety of elements that tie together pretty well.
The soundtrack screams late 80’s with deep basslines and the occasional drum solo. The matching symbols produce different sounds too, and when a bomb explodes it generates a high-pitched synth note instead of a regular explosion, which is a great touch. 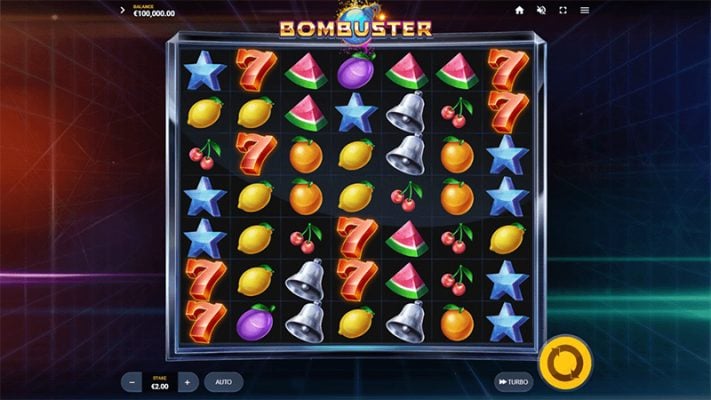 There are a variety of special features in this game, with the Wild W symbol acting as a substitute for other symbols. The Wild Bomb feature will remain in place for 200 spins and it will explode thereafter, turning everything around it into a Wild symbol. The Swap Bomb will lock it in place and it’ll explode after 50 spins, turning everything in its line of fire into the same symbol.

The Destroy Bomb will go off after 3 spins and it’ll destroy everything in its path. Chain explosions are a large part of the game and this is one of the key features that make it enjoyable.

Bombuster is a unique slot that has steered off the traditional 5-reel path to be something more entertaining. While this game can be quite confusing when you start playing, it’s easy to catch on regarding the purpose of each bomb. The game isn’t very volatile, but when it comes to the fun factor, it’s easy to see why this game is so enjoyable.