Take a stand against ruthless outlaws on the Western Frontier with Bounty Raid by Red Tiger Gaming. This 5x3 slot is equipped with a bonus round, 10 paylines, and a great design that captures the essence of the Old West. There’s also the chance of winning up to 1,000x your bet, and you wouldn’t want to pass up that opportunity.

How to Play Bounty Raid Slot

Before you start rounding up bandits and outlaws, you need to know how to play the game:

To survive in the West, you’ll need to have grit, and Bounty Raid captures that very well as the reels are set in front of a background that represents a horseback pursuit. The reels are surrounded by a wood and iron grid with a typical western pattern. The symbols are set on a red background, that ties in well with the dusty brown background.

The soundtrack is a relaxing guitar solo, and when the bonus round is triggered, it’s accompanied by harmonicas and electric guitars. Each character symbol also has a brief dialogue, which is a nice touch.

There aren’t too many bonuses available on this game, but there’s enough to keep you happy. The main feature is the Bounty Hunter symbol that appears on the 3rd reel, this then triggers a bonus round that locks all Bandit symbols in place when landing on them. The golden coin that appears during the bonus feature increases the value of the locked Bandit symbols, and disappears once the reels start spinning.

The Sheriff symbol is a scatter symbol that only appears once, and it activates the Bandit symbols to make them award their prizes.

Bounty Raid is a slot that many will enjoy, especially due to how intense it can get. The soundtrack and the aesthetics that this game brings is enough to attract new players, but Red Tiger Gaming has taken it a step further and has provided special symbols and a bonus round that makes it easy to rack up more earnings.

Furthermore, this game is very easy to understand and it’s even easier to get hooked on. While the main objective is to get the max multiplier of 1,022x your bet, we can’t help but gawk at this great-looking slot. 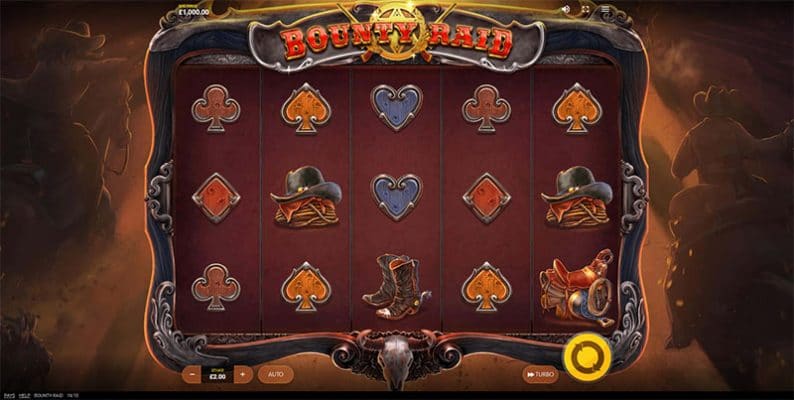