Combat Masters is an online slot brought to you by the Skyward Group. The slot has a 7x5 cascading reels setup and works with the cluster pays mechanic. Features available in the game include transforming symbols, extra wilds, battle bonuses and symbol destruction.

How to Play the Combat Masters Slot

Before we battle it out with the best of them, let's go over a few of the basics of the game's interface. You can set your required coin value by clicking on the +/- icons. Bet values can be set from 0.10 to 20.0 coins per spin. If you are ready, hit the spin icon to set the reels in motion. You can use the available autoplay feature for long periods of play.

The cartoonish style theme is very appealing and connects well with the storyline which is presented by a short video. The game takes place in 8 different worlds and the protagonist, a daring knight, has to battle many opponents as he begins his journey to becoming the combat master. Each time you land a winning combo, the health bar of your opponent reduces and eventually knocks them out. Occupying the rest of the screen is the grid with the symbols which consists of 6 brightly colored stones each displaying a motif and all of this accompanied by a great soundtrack.

Travel across the 8 worlds in the game, each with their own bonus feature. Stage bonuses include the Paint Bucket, Thunderbolt, SuperNova, Wild Tornado, Giant Bomb, Magic Flask, Flaming Dynamite and Hot Lava Ball. Play close attention to the wild meter above during the game. Should you land several wins of at least 16 matching symbols, you will unlock the Wild Power feature awarding up to 10 on-screen wilds. Travelling between worlds, you will be presented with the crossing of the Crystal Bridge challenge. This bonus takes you to a mini game where you have the choice of selecting and winning a prize. You will have two chances to select a random different prize, with the last pick being your final choice.

With so much to offer when compared to other slots of the same genre, the Skyward Group seems to have hit the nail on the head with their latest offering. Combat Masters offers something unique to its players with their in-game combat mechanic, loads of bonus features, a 96.07% RTP and a maximum win of 2, 000x your stake. This slot is sure to impress. Play the Combat Masters slot right here at CasinoTop Canada! 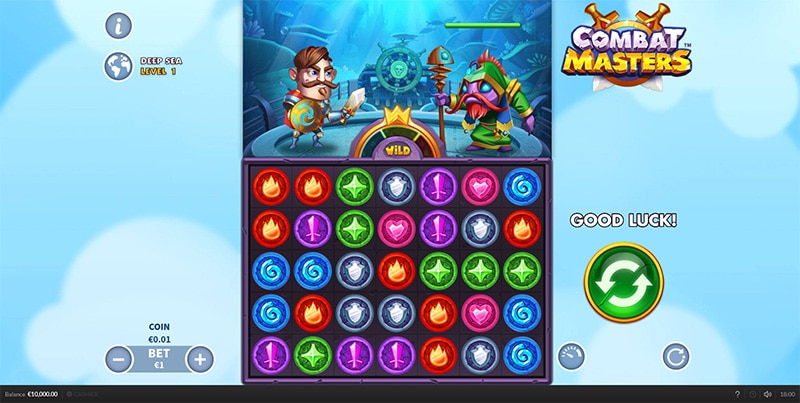