Deal or No Deal: Power Time 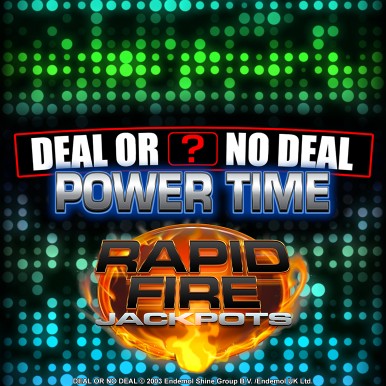 Deal or No Deal: Power Time

Game show themed slots are quite common, but few are as popular as Deal or No Deal, and now Blueprint Gaming has provided us with Deal or No Deal: Power Time, a 5 reel slot that features 20 paylines and a wide range of special features to boost your winnings.

How to Play Deal or No Deal: Power Time Slot

Before you can get started with your winning streak, you need to know how to play the game:

Deal or No Deal: Power Time is a slot that’s tied to other titles of the same name, just a different variation. This 5-reel slot is set on a background that oozes nostalgia with retro features such as disco lighting and the game itself is based on an AWP (Amusement with Prize) slot. Most of the screen will be filled with a wide range of features that are linked to the game and the symbols are based on classic fruit slots.

The sound effects that are used are generic yet applicable to the theme, with sounds generated with every win and bonus feature that’s triggered.

There’s no shortage of bonus features with Deal or No Deal: Power Time, as there are over 15 of them. The most prominent special feature is the Deal or No Deal bonus that’s triggered when you’ve collected 3 Deal or No Deal telephone symbols. This will give you the chance to partake in a bonus round that will allow you to upgrade the bonus.

The Rapid Fire Jackpot is also a great feature that can be won when landing on five or more of these overlays. Most of the bonuses in this game will provide you with free spins and mystery prizes.

If you’re a big fan of the TV show then Deal or No Deal: Power Time is a game that you’ll enjoy as there’s no shortage of bonus features and exciting prizes to be won. This is an extremely volatile slot which means that you’ll either have big wins or nothing at all, which is perfectly suited for those with deep pockets. This slot will take a while to get used to, so be sure to start slow and gradually increase your bets, and with all of the available features, you should also keep tabs on what’s happening on all of the special levels.