Remember Diablo? Always the bad guy in every other Mexican movie? Well it comes as no surprise as Diablo translates to Devil in Latin. Diablo Reels has a classic 3 reels and 3 rows setup with 5 paylines which doubles during a special feature. The online slot by ELK Studios features free spins, repins, stacked wilds, sticky wilds and multiplying wilds.

How to Play Diablo Reels Slot

To get started, first set your desired coin denominations by clicking on the stacked coin symbol. You may set your desired coin limit from 0.20 to 20.0 coins per spin. When you are ready, hit the spin icon to set the reels in motion. You can select the autoplay feature which includes limiter settings, if you feel tired of spinning manually.

Diablo Reels takes on a full Mexican festival theme in the form of "Dia De Muertos" or the commemoration of "The Day of the Dead". The modern Mexican soundtrack is quite catchy and puts you right there in the heart of the festival. When set in motion, the reels come alive with sounds of electronic tunes that indicate a win or possible bonus round. The background visuals comprise of many festival items such as a painted Diablo skull and sombrero, orange roses, a smoking cigar and of course a bottle of gold Tequila. The visuals are on par with any other modern slot title of the same genre and retains the intensity of the action.

The base game consists of 8 symbols on the reels represented by bars, chilies, limes, watermelon, bells, horseshoes, sevens and the diamonds being the highest paying symbol. A combination of 3 or more identical symbols in a row constitutes a win. Wilds substitute for any other symbol in a winning combination except for bonus symbols. A full vertical stack of wilds on any reel triggers the Wilds Stack Respins feature. This awards the player a respin on both upper and lower reels with a wild stack covering the entire reel on both of the reel sets.

A Nudging Wild feature gets activated when a nudging wild symbol appears anywhere on the reels. This feature nudges the reels upwards awarding multiple free spins until it leaves the screen at the top and comes with multipliers of 2x or 5x. The bonus game is triggered when you land 3 Diablo symbols anywhere on the reels. This awards the player with 10 free spins with a possibility of the bonus game being retriggered. The free spins bonus game is played on both adjacent reels with the upper reels containing only high paying symbols. The highest possible payout is set at 2, 500x your total stake on every spin.

Well on its way to being added to the pond of big fish, Diablo Reels has what it takes to stand out with the best of them. With a hit frequency of 18.1% and a return to player (RTP) rate of 96.3% makes this medium to high volatility slot a hard hitter. The Diablo Reels online slot will have you singing for joy as you will find big bonuses and cash rewards crammed into a classic slot machine setup. Diablo Reels is a great online slot which comes well recommended and is definitely worth adding to your list. Play the Diablo Reels online slot right here at CasinoTop Canada! 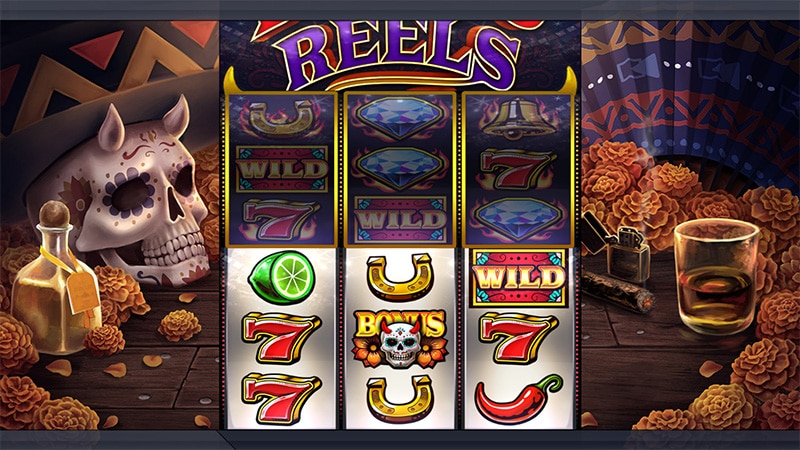