Before we step out into the wild, let's cover the basics of the game's interface. First select your desired coin denomination by clicking on the +/- values. You may set your preferred bet range starting from 0.10 to 25.0 per spin. Next, hit the spin icon to set the reels in motion. If you tire of spinning, use the handy autoplay feature for autonomous play.

The visuals in Diamond King Jackpots are outstanding. You are greeted by the majestic king lion, standing alongside the reels which overlooks the wild African planes. The base game consists of the low end symbols represented by the card royals ranging from 9 to A. Following them are the higher paying symbols which are the meerkats, the zebra, a rhinoceros, an elephant and the majestic lion. The one to look out for here would be the diamond symbol which also happens to be the wild symbol. You will find the typical safari soundtrack here, albeit missing the narrator's voiceover. The other accompanying sounds will indicate a win or bonus round and maintains the intensity of the action over long periods of play.

The diamond symbol appears on reels 2, 3 and 4 only and will substitute for any base symbol in a winning combination. The giraffe silhouette is the scatter symbol and unlocks the free spins feature. By landing 3, 4 or 5 scatter symbols in any position on the reels awards 10, 15 or 20 spins respectively. The Power Range feature is available in the base game as well as the free spins round. During normal play, any wilds that appear in the Power Range zone will award a 2x multiplier. The Power Range increases in size during the free spins round and awards a random multiplier of 2x, 3x or 5x. There are 4 jackpots available in the Diamond King Jackpots slot and are triggered when the diamond meter is completely filled. The diamond meter fills up with each spin you take. Landing diamond symbols in the Power Range area contributes to double the value. The 5, 000x your stake big jackpot may not come that often, however the Pick'em bonus game allows for a random jackpot win amount nonetheless.

Filled with enough jackpot prizes and multipliers to keep any regular casino slot player content, Diamond King Jackpots seemed to come fully packaged. In fact, with the diamond multipliers, you could see a win potential of up to 10, 912x your stake. The online slot by Microgaming has an average return to player rate of 96,44% and in the medium to high volatility range of slots. Play the Diamond King Jackpots slot here at CasinoTop Canada! 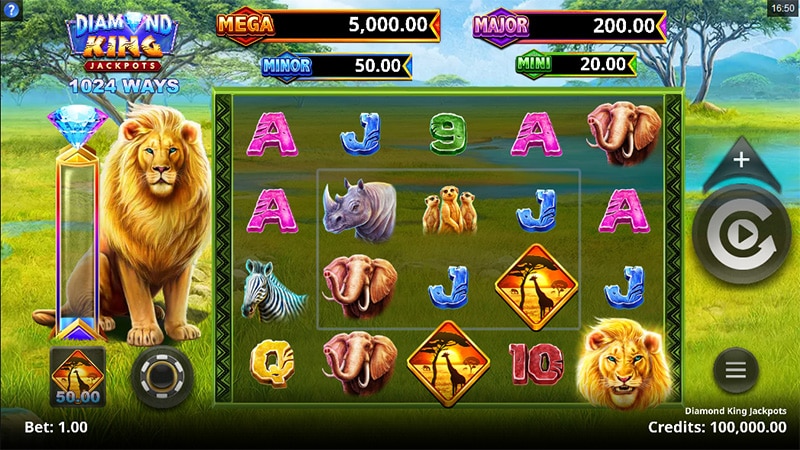