Play’n GO is well-acquainted with developing unique and innovative slots, and Diamond Vortex is no exception to that rule. This online slot features 7 reels and only 1 payline on a hexagon platform that takes place in outer space. This slot game is one of the most unique ones out there and there are plenty of reasons for you to give it a shot.

How to Play Diamond Vortex Slot

Before you get sucked in by the vast spectrum of color, you should know how to play this game:

Stating the Diamond Vortex is a unique game is an understatement as this slot is unlike anything else available. The slot is a vortex and it uses a cascade style of play, meaning that symbols keep falling. The background changes from purple and blue, to pink once the multiplier is activated. This is a great touch as it’ll keep you engaged.

The soundtrack is great, as it reminds us of an outer space exploration theme with a touch of an epic story. It’s a lot to take in but it’s worth it, especially once you start on your winning streak. 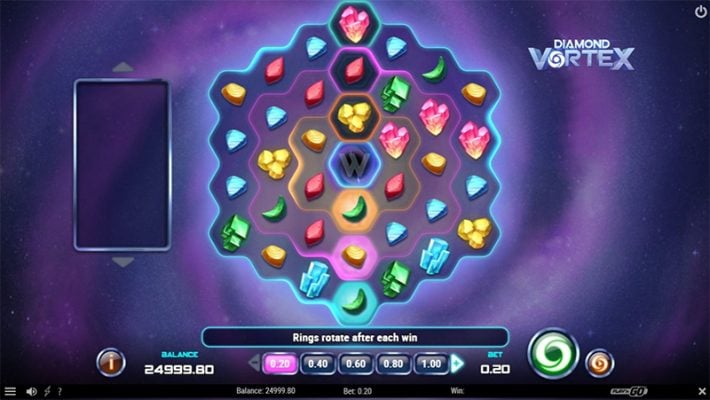 One of the key features of this game is the cluster system that it uses. This paired with the colorful gems are a great match and we understand why the developers did it. The game has a Core Wild symbol which is permanent. This also draws in other Wilds symbols and they will move closer to the Core Wild if you land a win.

A second feature, known as Consume, is when the Wilds get to the center. These are then consumed and a multiplier will start to increase. Transform is another feature, and this changes all symbols in the Zone to the same one.

All of the features of this game tie in very well together and Diamond Vortex is a special slot. Play’n Go took a chance and released a game that could’ve failed miserably, but instead, we are left with a marvelous slot that has a variety of unique features and it strays off the beaten path from what’s found in conventional slots. We would recommend this game to anyone that’s looking for something different, not only because of the gameplay, but also the general design.