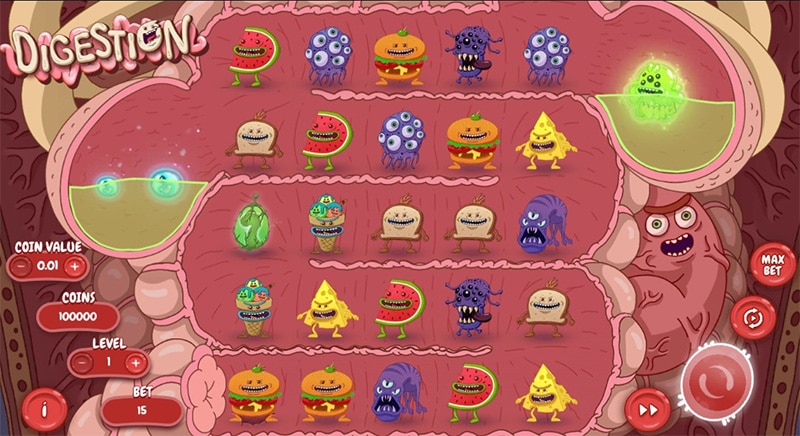 This unconventional Digestion slot by Gamshy features cascade-style reels that present a 5x5 format, but what makes this such an interesting game is its extremely unusual style and how it operates. The paylines work unlike any other, as all you need to do is line up the symbols vertically, horizontally, and diagonally.

How to Play Digestion Slot

Before getting started on your digestive journey, you should understand how the game is played.

Digestion has an abnormal design that takes place in the intestine of the human body. While some might find this a bit gross, the cartoon theme makes it easier to “stomach”. The symbols that are found in this game consist of food, bacteria, and parasites.

The audio effects used in Digestion are fitting as the sounds of bubbling and stomach acid can be heard if you listen closely. The soundtrack is fast-paced and sounds rather sinister, yet playful. There are also a variety of other sounds used such as belching and farting.

Digestion is a slot that will appeal to a particular group of individuals, and this is what makes it so special. This slot isn’t littered with mind-blowing features, but it features plenty of smaller ones that make tie it together very well. The soundtrack and design will make this a huge hit with more “juvenile” age groups, especially those that are looking for an incredibly unique slot.