If you are looking for a high volatility slot with a huge amount of paylines, look no further than the Dragon Tribe slot from NoLimit City. Featuring the xWays mechanic which is similar to the Megaways feature by giving you 4, 096 ways to win. The slot comes with a 6 reels and 4 rows setup which can expand to 6 rows, increasing the ways to win to a massive 20, 736 paylines!

How to Play Dragon Tribe Slot

Before we jump into the slot game, let's go over a few of the basics and how the interface works

Besides featuring the xWays mechanic, the video slot also features the NoLimit City indigenous xNudge feature. The xNudge wild symbols will appear on reels 2, 3, 4 and 5 only and when it does it could multiply your winning combination up to six times in one spin.

The dragon symbols blend perfectly with the theme of the slot and the crispy HD visuals are animated and brightly colored. Base symbols consist of the royals from 9 to A, which are followed by 5 other uniquely coloured dragons which are high paying. The highest paying symbol would be a cartoon style version of the protagonist in the animated movie, The Croods. The ominous music score sounds like an intro to a superhero movie, however seems to suit the prehistoric theme quite nicely.

There are three distinct main features in this game, which are the xNugde Wilds, the Dragon Spins bonus feature and the xWays Mystery Symbol. As mentioned, the xNudge Wild symbol can multiply the winning combination up to 6x. When this happens, the symbol will drop down and for every fall, it ups the wins until it expands to entirely cover up the reel.

The Wild symbol replaces everything else apart from the scatter bonus symbol. What you should also know is that the xWays Mystery icon has the ability to hold two or three identical symbols, thereafter expanding to hide the reel and for up to six rows. The mystery symbol can appear in the base game and free spin bonus rounds and can land on any of the reels. The star of the show would undoubtedly be the Dragon Spins bonus feature. When 3 bonus symbols land in any position on the reels, you will be awarded with ten free spins and the ability to choose between normal or extreme mode for the bonus round. During this bonus feature, every 3rd winning cascade will turn one of the 5 dragons into wilds for the rest of the bonus round and award +2 spins each time.

Not only does this slot feature loads of win ways, but also free spins galore. This lucrative title could see you winning a potential maximum of 27, 000 times your bet, which is huge by any standard. There is a lot to be enjoyed here and you will soon find it added to your favorites in no time. The slot has an average return to player of 96.06% and comes highly recommended by our standards. Play the Dragon Tribe slot right here at CasinoTop Canada! 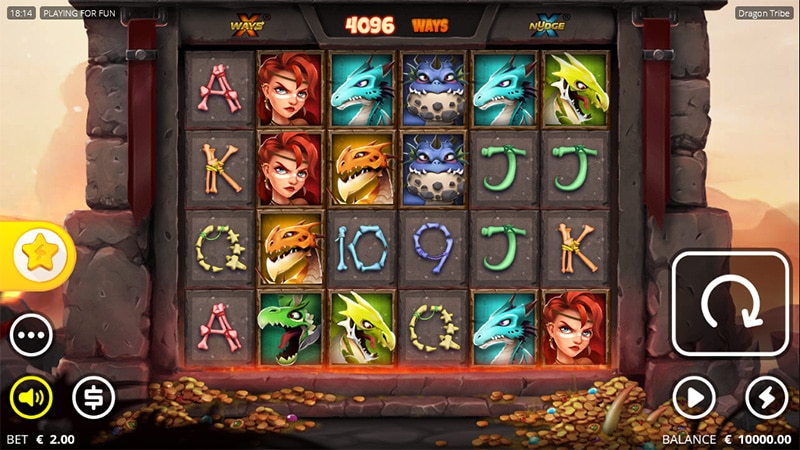