Ducks Till Dawn
Play for Real

Partake in a strange fair game with Ducks Till Dawn by Kalamba Games. This odd slot features 4096 ways to win with a 6x4 grid. There is also an abundance of bonus features such as wild symbols, hyper bonus rounds, and more. This is also paired with a medium to high variance.

How to Play Ducks Till Dawn Slot

Before you put those creepy ducks in your crosshairs, you’ll need to understand how to play the game:

Ducks Till Dawn is an eerie game that’s set in an abandoned carnival at night. The symbols consist of various stuffed animals and balloons; however, they’re not the kind that would be welcomed by children, as they’re all worn and have a sinister look. The reels are set inside of a duck hunt booth which is surrounded by lights and cobwebs.

The soundtrack features a sinister tune that leaves the player feeling uneasy as it’s slow, features low bass notes, and high pitched “carnival noises”. One of the best parts of the sound design is awaiting the final crystal ball as it generates the same sound like a horror buildup to a jump scare.

Ducks Till Dawn has a great Hyper Bonus feature that provides you with free spins, more ducks, and more symbols. Some of the ducks also have multipliers attached to them, which makes it more satisfying than the base game. This feature can also be bought if you don’t want to wait for the bonus round to be triggered by landing on crystal balls.

The Cash Ducks are a prominent feature that’s available throughout the game and these are the only symbols that keep moving from right to left as you spin the reels.

Ducks Till Dawn is an incredibly unique and somewhat twisted game and a lot of fun to play; however, it’s not one that will appeal to everyone. The cluttered, weird, and unsettling theme ties in perfectly with the soundtrack of the game. The Cash Duck feature is a great touch, and it allows you to get instant cash without having to worry about landing on wins.

The medium to high variance of this game leans toward the higher end of the spectrum as you’ll likely end up with big wins over short periods. 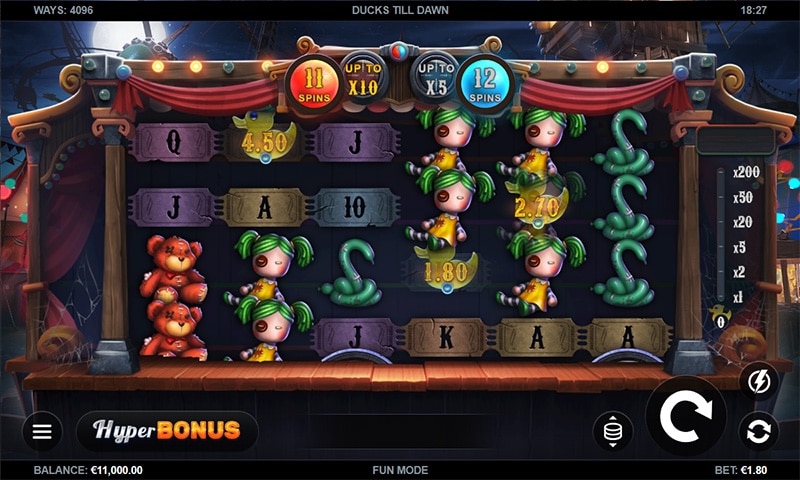