Irish-themed slots aren’t a genre that many developers like to deal with simply due to the limitations they present. However, Nolimit City has knocked the presentation for Gaelic Gold out of the back by presenting a 3x3 grid with 5 paylines, traditional symbols, and a handful of neat bonus features.

How to Play Gaelic Gold Slot

Before you go hunting for gold in the luscious green hills of Ireland, you’ll need to know how to play the game:

Gaelic Gold is set in the hills of Ireland near a lake, on a cloudy, yet a beautiful day that presents animated clouds, rain, and water. The reels are set in a wooden grid that’s covered in vines, while the symbols consist of golden clovers, golden horseshoes, beer, green shoes, green top hats, and wooden card values.

The soundtrack consists of a traditional fiddle song, with wins accompanied by pan pipes. The bonus round presents a livelier soundtrack that’s reminiscent of what’s used in traditional river dancing. Ambient sounds include rainfall and birds chirping, which is incredibly peaceful.

It’s easy to assume that a slot of this size wouldn’t have much to offer with special features but Gaelic Gold has a few tricks up its sleeve. The xNudge wild symbol is a Leprechaun-themed symbol that covers a whole reel and it comes with a multiplier booster. Rainbow Spins is the main feature of this slot, and after landing the Pot of Gold symbol on the middle row a minimum of 5 times, you’ll trigger this bonus round. You’ll be given the chance to choose from 9 coins and the choices are multipliers, rainbow lines, and free spins.

If you’re fond of Irish culture and fiddle music, you’ll appreciate the effort that’s put into this slot, as it’s simple, yet elegant. Gaelic Gold sports excellent graphics, bold colors, a great soundtrack, and bonuses that are easy to understand and not impossible to land. The 3x3 layout might drive a few slot fans away and the low number of paylines also makes it difficult to want to invest in this game; however, this is one that you should try, as there’s the possibility for huge wins. Overall, this is an Irish-themed slot done right, and there’s no reason why you should avoid it. 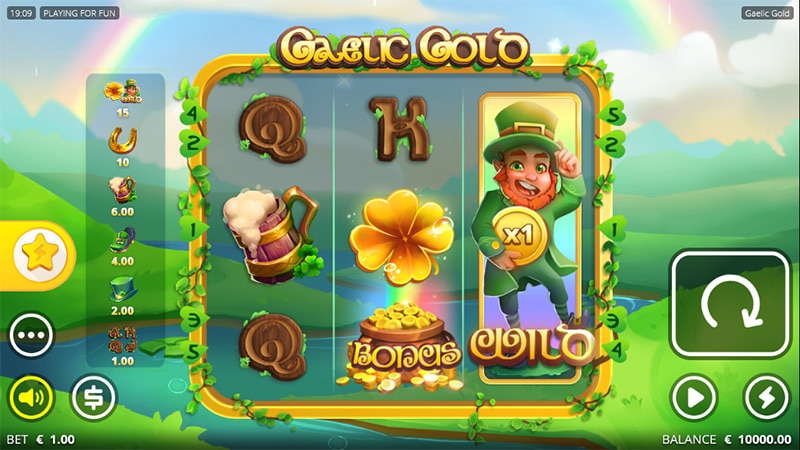