One of Green Jade Games’ latest offerings, Gladius K.O features six reels and 50 paylines. The slot allows you to harness your inner Roman with a great design and a variety of extra features that’ll keep you entertained for hours. This slot features scatter symbols that will trigger a bonus game if you manage to land on four or more of them.

How to Play Gladius K.O Slot

Before you run into battle, you must understand how to play the game. Below you’ll find some information on how to do so:

The general design of the game is quite good as Green Jade Games have successfully incorporated an ancient Roman theme. We like the contrast that the reels generate along with the crimson panels, this ties in well with the blood on the metallic symbols. The background is gritty and displays a battlefield that sets a somber tone.

The soundtrack fits in perfectly with the design of the slot, as it’s incredibly dramatic. Unfortunately, we feel that the developers could’ve done more with regards to the sound design of the wins and the spinning of the reels. 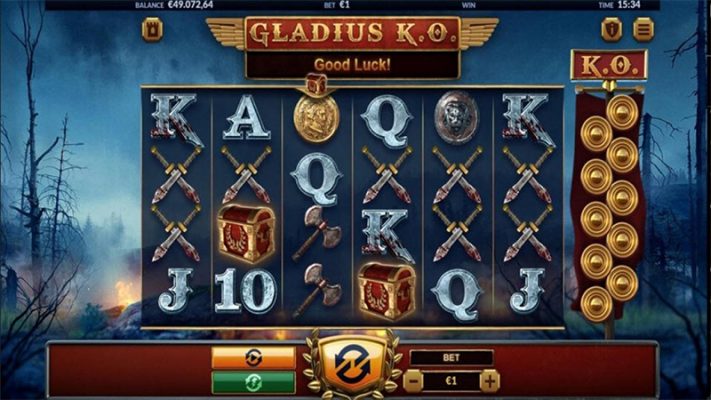 All of the symbols found in the game are related to some aspect of ancient Roman culture. The wild symbol comes in the form of an eagle, and this falls in for any missing symbol except the chests. The chests will grant you an instant prize if you’re able to land on three in a row. The Knock Out mechanic featured on the right-hand side of the screen assists you to align chests.
Unlike most slots, Gladius K.O doesn’t feature any scatter symbols, instead, it has Marching Wilds. This has the symbols move from left to right and each move triggers another spin with an increase on the game’s multiplier. There’s also a Shell Gamebonus that lets you select the right cup. The prizes available are based on the bet you’ve made.

Gladius K.O strays off the beaten path by incorporating its mechanics into a unique slot that feels familiar at the same time. The additional mechanics are a great touch and the simplicity of the game is something that will attract a lot of prospective players. We liked the simplicity of the design and the small details that will likely be missed by the untrained eye.
The soundtrack is one of the strong points, with subtle changes being implemented during the mini-game followed by a Vegas themed jingle that reminds you that you’re playing a slot.