Hit it Hard
Play for Real

Hit it Hard is a 3-reel slot that features 5 paylines and a high variance. However, this is no ordinary slot as Elk Studios has packed an insane number of special features into this tiny slot, and because of its high variance, you can expect to see huge wins in a short timeframe.

How to Play Hit it Hard Slot

Before you can get started on your retro journey, you’ll need to know how to play the game:

Hit it Hard is set on a red and blue background with a rough texture, the reels are set beneath the cabinet of the slot and all of the features can be seen above. The retro look of the slot comes with classic symbols such as Red Lucky 7’s, Blue Lucky 7’s, Green Lucky 7’s, Red Triple Bars, Blue Double Bars, Green Single Bars, Watermelons, Lemons, and Cherries.

The soundtrack used in Hit it Hard sounds strangely gospel-like, as there’s an upbeat melody that’s played with a piano and a pipe organ. Other sounds include the spinning of reels and the landing of wins.

Hit it Hard has a few great features that are available if you’re lucky enough to land on them. If the Bonus Symbol lands in the middle of the 3rd reel it will trigger the Bonus Game and transform into a 10x multiplier. The Bonus Reel is operated by a dice feature that decides how many spins you’re able to get.

Multiplier Wilds can stick to the reels if you don’t land on a win, and these symbols are exclusive to the 3rd reel. There are mini features that are found in the bonus game such as Lucky Ballz, Super Ballz, Break the Bank, Stacked Wilds, and 10 Wild Spins.

Hit it Hard is a wolf in sheep’s clothing as any unsuspecting player who thinks that this slot is a standard game with one or two features will be pleasantly surprised. Despite the small max win of 2,500x the stake, this slot is packed with an incredible number of features and most of them are inside a lucrative bonus round.

This slot also has a classic retro look to it, which will likely make it a favorite with older players that are looking to relive their younger years, and the catchy soundtrack will help them do that. This slot will take a while to get used to; however, it’s worth it to give it a try. 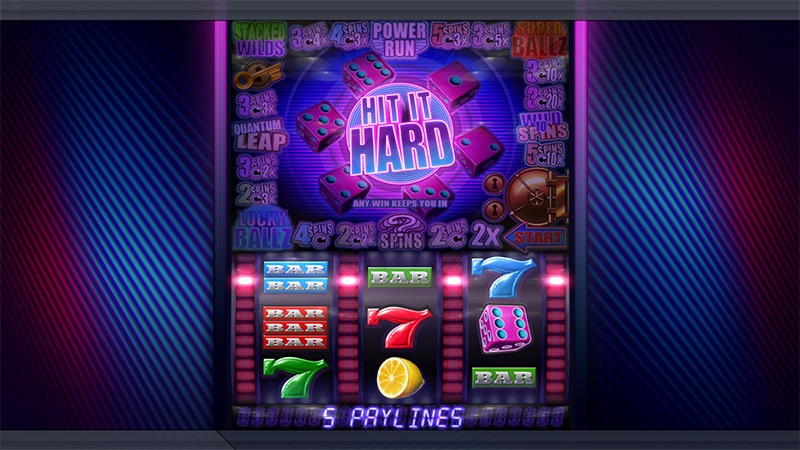