Enter a colourful realm overlooking the surface of Jupiter with IO by Elk Studios. This unique slot features a strange grid that has a cascade feature that starts with 4,096 ways to win, but this quickly escalates to a massive 262,144 ways to win. Charged Wilds, Avalanche mechanics, and traditional wilds are part of what makes this a great game.

How to Play IO Slot

Before embarking on your space expedition, you’ll need to know how to play the game:

IO takes place in space overlooking Jupiter with the rest of the background covered in stars. The grid is surrounded by a neon-lit wall that looks like it’s in some sort of command center. All of the symbols are in spheres, but none of them are linked to anything relative to space. This slot features amazing graphics, and this is shown by how symbols disappear with a flicker of rainbow-colored dust.

The soundtrack will be enjoyed by techno fans as it sounds very similar to tracks that were mixed by the legendary artist Robert Miles. Other sound effects include laser beams and high-pitched sounds that indicate wins.

IO has no shortage of features as this is seen by the number of special symbols that are present in the base game. Bonus/Scatter symbols will trigger free drops/spins in a bonus round which is played with 8 rows. Charged Wilds can substitute any regular symbol and will stick around for four lives, and a life is lost whenever it contributes to a winning combo. Standard Wild symbols can substitute any normal symbol and it’s also the highest paying symbol in the game. Wild Forge symbols will occupy a space with a multiplier wild when it reaches the bottom.

IO is a slot that will draw plenty of attention from techno and sci-fi fans as it’s successfully incorporated both elements into its overall design and soundtrack. This slot uses a barrage of features that are tied together into a well-designed package that uses laser beams, cloning, and amazing sound effects to provide the player with an immersive experience. The avalanche mechanic is a great feature that makes it a lot more forgiving, as it’s essentially a respin. Overall, this is a slot that new and seasoned players could appreciate, not only for how unique it is but for the craftsmanship that went into its development. 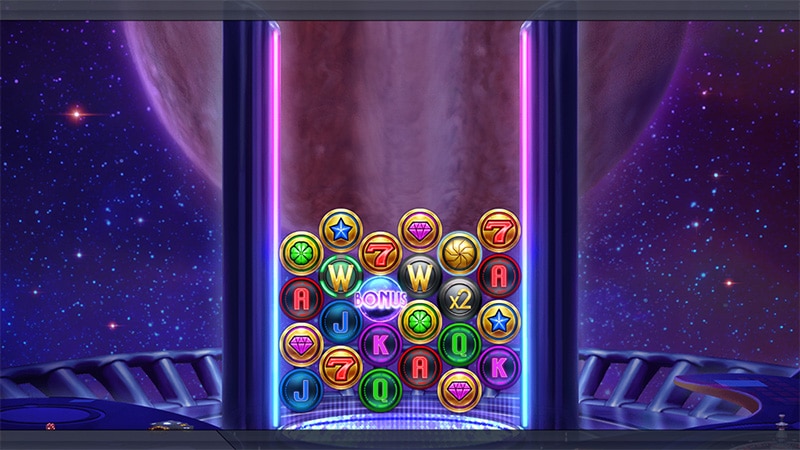