Hunt for treasure with Jolly Roger 2 by Play’n GO. This slot features 5 reels with 20 paylines, and it’s one of the most exciting pirate-themed slots around. This slot has an RTP of 96.2%, which is below the industry standard, but this doesn’t take away anything from the game.

How to Play Jolly Roger Slot

Before embarking on your quest for gold, you need to understand the in-game mechanics:

Jolly Roger 2 has a simple design that takes place on the deck of a pirate ship. The symbols are of typical pirate life, with objects such as bottles of rum, various treasure trinkets, a treasure chest, diamonds, a ring with a skull on it, and a skull and crossbones flag. The rest of the symbols are the standard royal flush symbols of 10, J, Q, K, and A.

The soundtrack is reminiscent of an epic scene from a Pirates of the Caribbean film. With plenty of high and low notes. The general sound design is very good, with the reels sounding like creaking wood when they stop spinning. 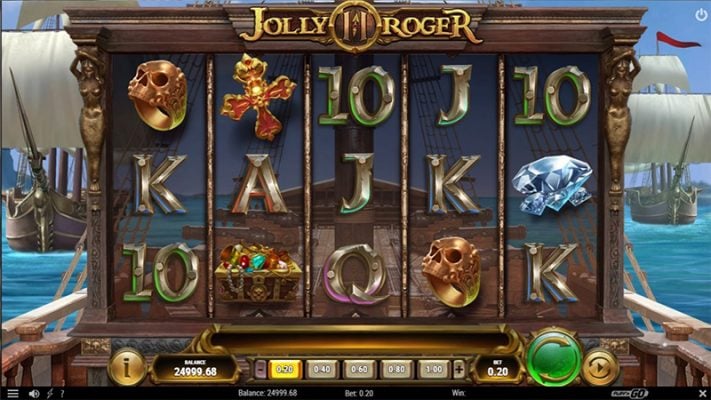 One of the main features of this slot is the Compass Multiplier, this can award you with a multiplier up to 10x the amount of the initial bet. The bonus quest is another great feature of this game, this happens when you land on 3 scatter symbols. You’ll then be allowed to select 3 pieces that need to match to claim one of 4 different prizes.

The instant prize is a random gift that can be anything from 2x to 10x your bet; however, it can go up to 20x the amount. The bottle of rum free spin will give you the chance to get a multiplier on your bet, which is a great feature.

Overall, Jolly Roger 2 looks to be a great improvement from the previous version. This slot game has plenty of different features and it’s easy for anyone to get started due to the simplicity of the in-game mechanics. The soundtrack and general theme tie together well with the colour pallet that was chosen for this game. Overall, this version of the game is miles better than the previous one.