Feel the magic of the Mayan mysteries as they unfold in Nolimit City's Mayan Magic online slot. The game has a 5 reel and 3 rows setup with 10 solid paylines. Bonus features include Mayan Wilds, Mystery Wild and Mystery Sync.

How to Play the Mayan Magic Slot

Before we can unlock the hidden treasures of an Ancient Mayan Civilization, let's go over a few of the basics of the game's interface. First, click on the +/- icons to set your desired coin value. The betting range starts from 0.10 to 50.0 coins per spin. If you are good to go, you can hit the spin icon to set the reels in motion. Luckily, you do have the option of selecting the autoplay feature for autonomous playing.

You are placed deep in the lush South American jungle. The background waterfall is made apparent by the sounds of the rapids crashing up against the river banks. Pan flute sounds complete the serene atmosphere that the game adapts. The base game symbols consist of 5 highs and 5 lows. High end symbols are represented by the Mayan King, his Queen, a Mayan warrior, a leopard and a snake. At the low end are 5 differently colored gemstones. The graphics are delivered in HD visuals and the screen always seems to come alive and animated and just adds to the intensity of the game. 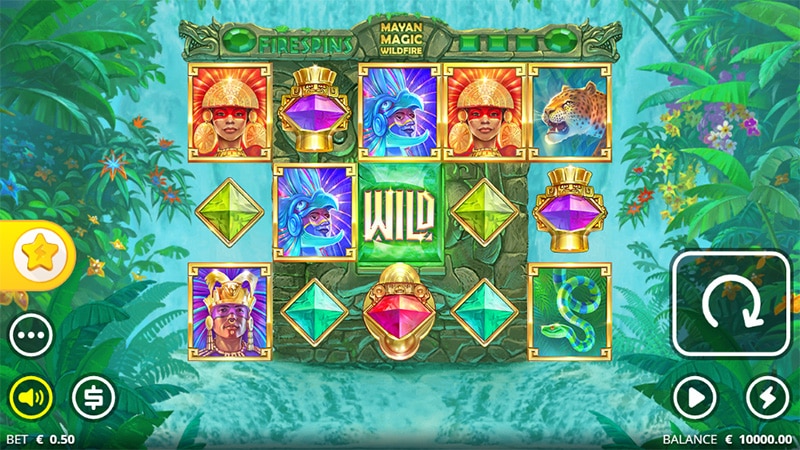 As mentioned, there are 3 bonus features available in the game. The Mystery Sync feature gets activated randomly during normal play. Here all symbols on reels 2, 3 and 4 will sync together. The Mystery Wild feature is also triggered randomly and here the symbol on the center reel will turn wild. All other symbols on the reel that match the symbol that turned wild will also turn wild increasing your win. The Mayan Wild feature would be the most favored here. This feature is activated when wild symbols land on reels 2, 3 and 4. The center reel becomes a sticky wild for the next spin. A respin will be awarded for each sticky wild that appears and the spins will continue until there are no wins left.

There is great fun to be had with the Mayan Magic online slot from the Nolimit City group. With an assortment of quality titles that the software provider has listed, Mayan Magic is ready to be part of the fleet. The medium volatility slot brings with it an average RTP of 96.04% and a maximum win potential of up to 2, 500x your stake.