Mystic Hive is a 3-4-5-4-3 slot developed by Betsoft that comes with 30 paylines. However, this honeycomb-shaped grid also has a decent range of features such as a Nectar Meter, special Fireflies, and Nectar Burst Spreading Wild symbols. There’s a lot that this slot has to offer and not only is it beautiful, but it has the potential to be incredibly lucrative.

How to Play Mystic Hive Slot

Before you can work on harvesting nectar, you’ll need to know how this slot works:

Mystic Hive is set in a tree and is shaped like a honeycomb, the nectar bottle next to the reels is usually filled with purple nectar, and the symbols used are linked to the theme of the game. Standard symbols are dunked in honey, whereas high-paying symbols consist of gems and mushrooms. The logo of the game is on the left of the screen.
The soundtrack that’s used for this game is tranquil and features a beautiful piano piece with choral notes. It picks up as soon as the bonus round is activated. Other sounds include the spinning of reels, twinkling, and light popping. 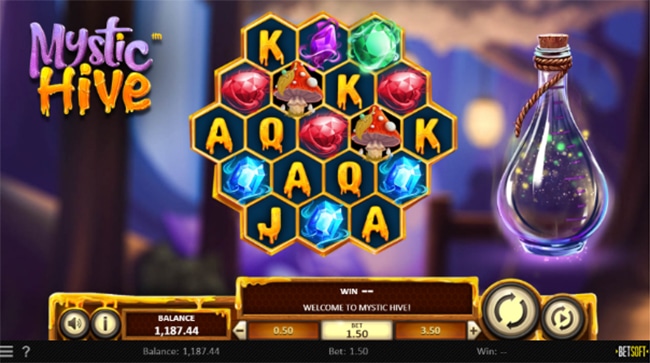 Mystic Hive has an abundance of great features such as the wild symbol that will substitute any normal symbol to complete a match. There is also a range of Mystic Fireflies that will help you collect nectar, stack multipliers, and fill the violet nectar meter.

Filling the Nectar Meter will provide you with 5 free spins and you’ll also be awarded up to 3 Nectar Burst Spreading Wilds. These are special Wild symbols that only appear during free spins mode and they spread to cells that are adjacent to them after every spin, they will disappear at the end of the bonus round.

Mystic Hive is a slot that can easily be mistaken for a low-paying slot due to how frequently you end up in the bonus round, but this is a high-variance slot that’s capable of delivering big wins in short periods. The 900x payment that can be received for landing on five green gems is insane, and the highest amount achievable in this game.

The attractive nature of this slot is what’ll make it a favorite with new players as this will put their minds at ease. The Firefly feature is incredible and it works well, as it’s possible to exploit all these features after a handful of bets.