Nolimit City has released another masterpiece with the Punk Rocker slot. This 5x3 grid slot features 243 ways to win that can expand up to 46,656 with a unique theme that’s filled with anarchy. Furthermore, there’s an extensive range of great features such as Anarchy & Civil War Free Spins, Riot Respins, Wild Symbols, and more.

How to Play Punk Rocker Slot

Before you join the revolution, you’ll need to understand how to play this game:

The design of Punk Rocker is set in England, where the culture started, as telephone booths, Underground signs, and British rockers can be seen in the game. The cluttered wall and vandalism ooze hooliganism, and this shows the attention to detail that went into this game. Symbols include rocker parodies of famous people such as Albert Einstein, Mona Lisa, Sean Connery, and Winston Churchill.

Punk Rocker features a soundtrack that sounds like a rock concert behind closed doors, but as soon as a special feature is activated, it becomes much clearer. Other sounds include chains rattling and people screaming. 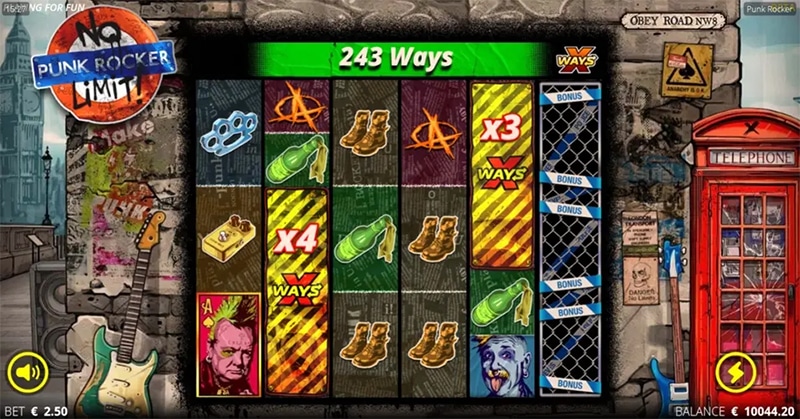 The Riot Respin feature is awarded when landing on two scatter symbols, these symbols then become Molotov Wilds and will lock the reels. An additional reel will be unlocked to open 729 winning ways. Anarchy & Civil War Respins are activated with, enhancers will appear at the top of reels and you can be awarded one if a Jumping Wild is found on the reel.

The xWays Mystery Symbol can hold 2 to 4 of the same symbols and can expand the reels. These symbols can expand a reel up to 6 symbols high and are activated during the main game and free spins.

Punk Rocker is an interesting looking game and the developers have taken a theme that was once frowned upon during the late ‘80s and has turned it into something fun and lucrative. This slot has a variety of great features that range from wild symbols to free spins and ones that have become an expectation from Nolimit City such as expanding reels.

The Nitropolis slot has proven that the Nolimit City team does unusual themes very well, and they’ve managed to control anarchy and make it work inside a slot. This is a fantastic game that will be a hit with all kinds of players.