Ready, Set, Cash slot is a game developed by Skywind and it features 20 paylines, a 5x3 grid, and a variety of bonus features that will assist you with your winnings. This slot also features a clean design with a retro-inspired soundtrack that will have you moving in your seat.

Before you can attempt your first winning spree, you’ll need to know how this game works.

The soundtrack is the main feature of Ready, Set, Cash slot beside the gameplay, as it’s an incredibly upbeat disco styled genre which sounds like its straight out of the late 1970s. The track changes to a livelier and funkier version of itself during the bonus round, which is a great touch.

The grid is set on a blue and purple mix background and it’s surrounded by a blue border. The reels are set on a black background and the symbols consist of all of the classics, such as bells, bars, cherries, 7’s, and a variety of special ones. 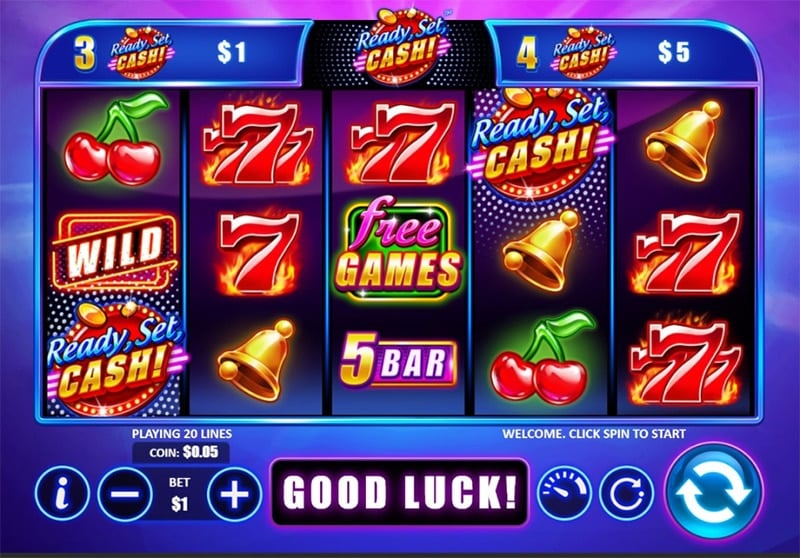 Ready, Set, Cash slot isn’t littered with bonus features but it has more than enough to keep you entertained. The Wild symbols can substitute any regular symbol, and it’s also the highest paying symbol in the game. The Scatter (free games) symbol will award you with a free spin bonus for every 3 symbols on which you land.

The Free Spins Bonus gives you the chance to choose 3 matching coins, and this will determine how many free spins you get and the size of your multiplier. The Ready, Set, Cash symbol will award you with massive cash bonuses up to x9 your bet.

Ready, Set, Cash slot is a simple game with simple bonuses, but this doesn’t mean that they’re ineffective, on the contrary, the Free Spins Bonus that’s found in this game is one of the most lucrative bonuses that are found in modern slots. The 20 payline system and the low number of symbols mean that you’ll be running into these special features more often than you think.

The soundtrack is fantastic, and the graphics are mediocre; however, due to the classic nature of this slot, it will attract older players that are looking to scratch the itch of nostalgia.