Shamrock Holmes Megaways is the first megaways slot to be released by Microgaming. It features six reels but offers up to 117,649 ways to win. The game also boasts a maximum RTP percentage of 96,44 which is considered to be quite fair. The design of the game is beautiful and intricate, taking obvious inspiration from the Irish.

If you’re excited to give this game a try and explore the Irish forest with Shamrock Holmes, you’ll first need to learn how to place your wagers:

As a megaways title, selecting paylines is not possible, which means that the coin denomination that you choose is your total stake. That said, choosing a bet is very simple. You’ll need to click on the bet button and select your choice. Once you’ve selected your bet, all you’ll need to do is hit the spin button to set the reels in motion. There is also an autoplay feature should you prefer not to spin the reels manually.

The design of this game is done very well, with the main character, symbols, and background are depicted in great detail and in an almost cartoon-like manner. The reels are placed on the background of a lush, green, and almost ethereal, Irish forest instead of the usual Irish Hills that are often seen. The symbols that occupy the wooden reels are the W symbols, that represent wilds, Golden coin scatters, little leprechauns, vibrant flowers, lucky clovers, and fairies. 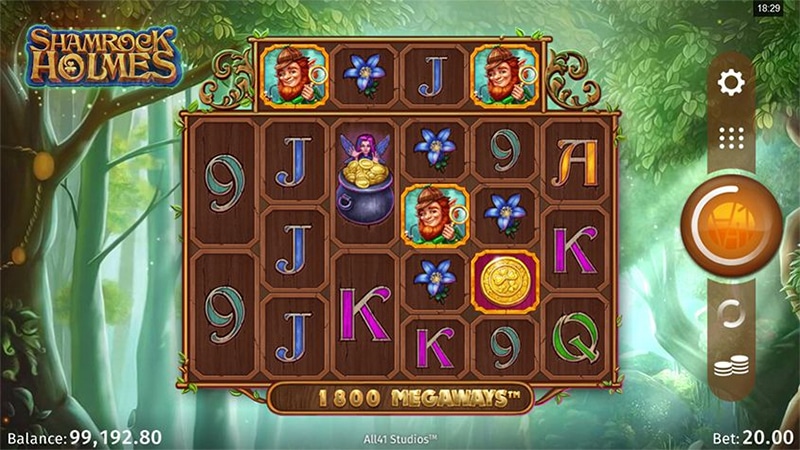 The system used in this game works on the six available reels. A range of 2-7 symbols is shown, with the number chosen randomly. The middle reel is overlaid with a horizontal line which is the only place that wilds will appear. If you get lucky with 7 symbols across the reels, you are then playing with 117,649 ways. If a combo forms, it will activate the Rolling Reels. The winning symbols are removed and are replaced by others, leading to additional wins. With the magic forest respins feature you are guaranteed a certain number of activated megaways ranging from 10,000, 32,400 to 117,649 wins. To trigger the respins you need three scatter symbols on the reels with 1 or 2 other symbols.

Shamrock Holmes Megaways is a very exciting game, with Microgaming going out of its way to ensure that you stand the chance to win big each time. The design and layout of the game are simple, beautiful, and comprehensive which has to lead to this game becoming a new favorite for many Megaways players.