No matter where you have travelled in the world before, you will never chase the sun as much as you would in this online slot title from Playson, Solar King. The Solar King online slot features 5 reels and 4 rows with 20 paylines and has a superb theme that will appeal to most players.

How to Play Solar King Slot

You begin by selecting the coin values by clicking on the up or down arrows from 0.20 to 100.0 credits per spin. If you are ready, you can hit the spin icon to set the reels in motion. You can let the reels spin autonomously by using the autospin feature if you tire from spinning manually.

The Solar King slot is an Egyptian themed online slot, with the sun god Ra's bestowed king as the protagonist. The Pharaoh is the highest paying symbol and also appears as a stacked symbol. The game features outstanding Egyptian art styling but can seem a bit low res. This does not take away too much from the action as the intensity is kept alive with the Arabian soundtrack.

The visual effects are on point and chasing the bonus sun symbols really adds to the excitement. The online slot has been fully ported to mobile and compatible with both Android and iOS devices. 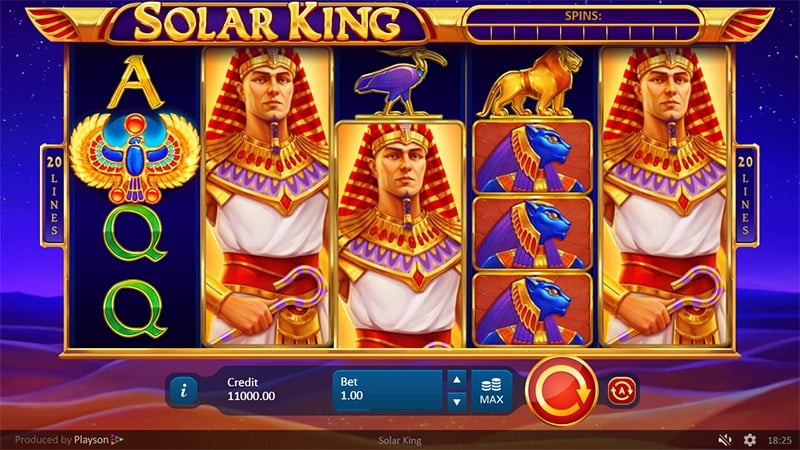 The base game consists of royals from 10 to A with the higher paying symbols being the ancient Egyptian god statues. A combination of 3, 4 or 5 matching symbols from left to right, constitutes a win. The scatter symbol is represented by an idol of the sun god and appears on reels 1, 3 and 5 only. Landing 3 of these symbols unlocks the free spins feature where you will be awarded 10 free spins.

The sun symbol activates the Flaming Frames feature with the flaming frames on the reels remaining for 10 spins. After the spins are completed, the flaming frames then transform into wilds for a multiplier win at the end. Wilds on wilds and sticky wilds rules apply on both the main game and bonus spins round.

Playson has released their third title in the series after following the success of Solar Temple and Solar Queen. They seem to have definitely turned it up a notch with their latest installment. The Solar King online slot has a RTP rate of 95,45% and a maximum win of up to 2, 221x your bet. The game features stacked symbols, wilds on wilds, sticky wilds, scatter free spins and multipliers.