Take to the stars and you could win up to 25,000x your bet with Star Bounty. This highly volatile slot features a 6x4 grid and 4096 ways to win and Pragmatic Play has ensured that there are more than enough bonus features to take advantage of.

How to Play Star Bounty Slot

Before you can go on your intergalactic adventure, you’ll need to understand how the game works:

Star Bounty is a space-themed slot that’s set in a different galaxy. The background features animated illustrations of various spacecraft docking and flying around. There are also beautiful waterfalls and dust storms. The reels symbols are hexagonal and link with one another in reels of four “blocks”. The symbols are linked to the theme of the game with various characters and symbols linked to space factions.

The idle soundtrack is filled with suspense, but as soon as you spin the reels it becomes livelier and pleasant to listen to. There are a few other sounds, with synthetic pops with each win, and other sci-fi sounds. 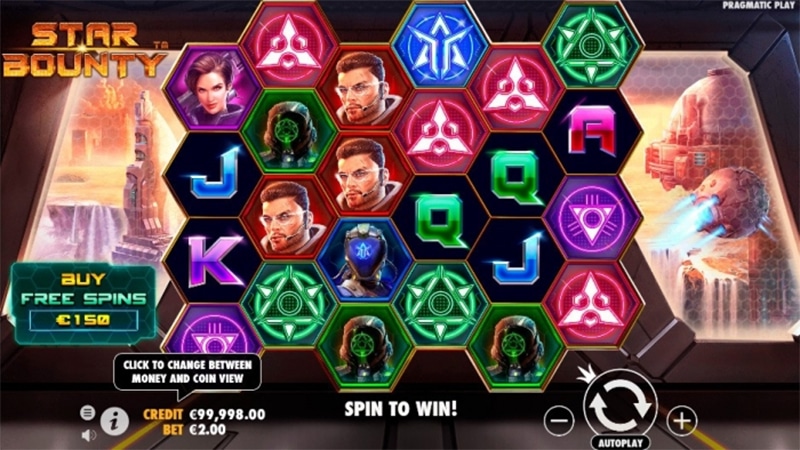 The Tumble Feature refers to the cascading mechanic that affects all symbols in the game. There’s also a Missile Feature that appears on the 2nd, 3rd, and 4th reels, and when triggered it transforms random symbols to wilds.

Star Bounty is a slot that’s not only a lot of fun to play, but it also has a lot of great features that make it easy for fans of sci-fi to understand the mechanics of the game. This slot doesn’t feature a very high variance, but we’ve encountered some huge wins while playing, and it’s all thanks to the bonus features. One of our favorite things about this game is the soundtrack, as it’s extremely tranquil, and it could rival a good film score.

Overall, this is a game that can be enjoyed by sci-fi fans or slot aficionados, either way, it’s guaranteed to give you a great time.