The Legend of Hercules
Play for Real

The Legend of Hercules

The Legend of Hercules is the new slot machine released by software developer Stakelogic. The game has 5 reels and a 30 payline option. The maximum payout is 10,000x the staked amount, which is quite decent and with a 95.05% RTP, it makes this slot quite interesting. Apart from this, The Legend of Hercules does not feature a progressive jackpot, although the winning potential is superb.

How to Play The Legend of Hercules Slot

As the name suggests, the game is clearly about Hercules, the demi-god from Greek mythology. In the game, you will see many of the characters that would have crossed paths with Hercules. There are some beautiful ladies, monsters and creatures that it is believed he fought with. In certain bonus levels, you even catch glimpses of some of the royals of the time. Other images that also appear in the game are a shield, which doubles as a wild. Other than that, there are also animals such as the lion and a bull who crossed paths with Hercules. 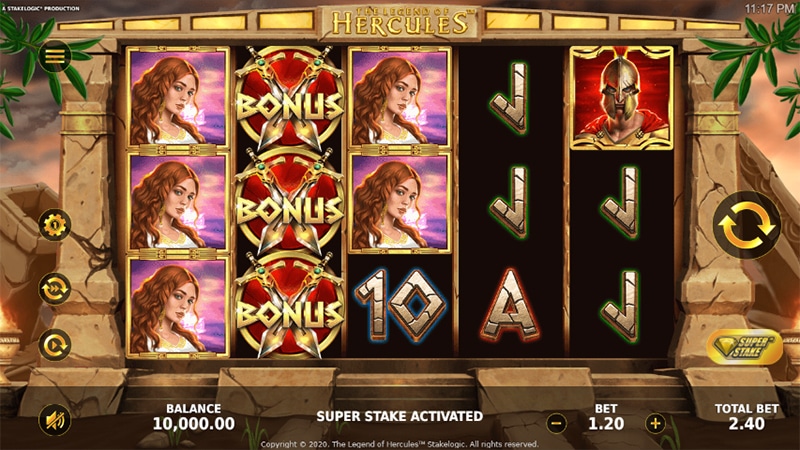 As the name suggests Hercules plays a big role in the game. The scatters and wilds in the game appear quite frequently and when they land in a certain way, they generate prizes, such as a winning of maybe 10 to 1000x the staked amount. If you manage to get a cluster of 7 to 9 scatters, you are eligible for anything from 8 to 30 free spins. As is customary with slots if you bet bigger, then your returns will be bigger as well. If you do so here, you could hit a jackpot of up to 10,000x your wager.

The Legend of Hercules will appeal to a wide player audience who enjoy slots. The 10,000x payout is a very significant jackpot and may be the core driving reason to try your luck. The game also offers smaller payouts to keep things interesting and rewarding. The entertainment factor is also sure to invite many players back to play some more.