The Nolimit City group presents their latest rendition of the Norse god in their online slot, Thor God of Thunder. The video slot has been crammed with features including Asgard Spins, Rune Raze and Hammer Time. Here you will find a 5 reel with 3 row setup and 20 fixed paylines.

How to Play Thor God of Thunder Slot

Before we can summon any lightning from the heavens above, let's get into a few of the basics of the game's interface. Select your desired coin denominations by clicking on the dollar symbol. Bet ranges start from 0.20 to 100.0 coins per spin. When you are all set, you can hit the spin icon to set the reels in motion. You can use the available autoplay feature which includes a limiter function, for ease of play.

Unlock Asgardian treasures and claim your fortune in gold. If you are a lover of Thor, Odin and other Norse related discourse, you should be accustomed to Nordic mythology themed slots. The story here is no different, except with a touch of quality and gaming mechanics added by Nolimit City's in-house casino gaming excellence. The base game is set out in 5 high and 5 low symbols which include a Thor's hammer, Thor's helmet, an axe, a goblet, a ring and 5 rune stones at the lower end. The music score is quite catchy and has an epic feel to it, which complements the game quite well. 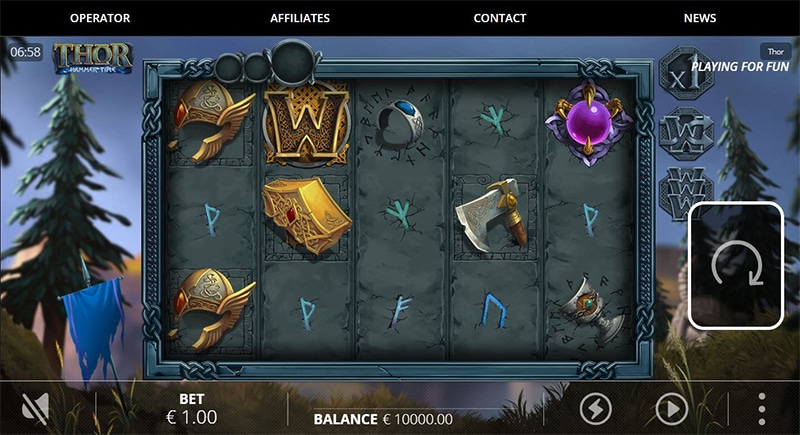 Each time you spin, keep an eye out for Thor's Lighting bonus symbol which appears on reel 5. This will either trigger a multiplier, a sticky wild reel or random sticky wilds. Thor will also award a respin for each time he nudges down. The Rune Raze feature can be activated at any time on any spin where all rune stones that appear will turn into the same symbol. The Hammer Time feature is also triggered randomly on any spin and when active, all high paying symbols will change into Thor's hammer which is the highest paying symbol of the lot.

The Scatter Energy Collect feature is activated when two scatter symbols appear anywhere on the reels. They assist towards the Asgard Spins feature and will continue giving respins as they nudge down. Collect 3 or more scatter symbols to unlock the Asgard Spins feature. The Thor's Lightning bonus symbol will appear more frequently on reel 5 during this feature and will award +2 spins, along with multipliers, sticky wilds or sticky wild reels.

With so many features available and a potential of winning a maximum of up to 2, 328x you bet, the Thor god of Thunder slot has everything to be desired. The medium volatility slot has an average return to player rate of 96.10% which is good news in anyone's books. Why not give it a go and try a few spins to see for yourself, at no obligation to you. You can play the Thor God of Thunder online slot now for free right here at CasinoTop Canada!