Thunder of Olympus
Play for Real

Thunder of Olympus is a new slot machine by Booongo. This slot is one of many by the same developer with a similar theme and boasts 5 reels and 25 paylines and the total payout is set at a cool 1000x the bet. Thunder of Olympus features Zeus as the major character along with sub-characters Aphrodite and Hera. What we like is that the ancient Greek flavour runs throughout the game,

How to Play Thunder of Olympus Slot

The design of the game is from ancient Greece descent which makes for an enjoyable experience if you’re into ancient Greek mythology. You’ll see all the ancient gods and goddesses as well as the Horn of Abundance scatter. Apart from that, there are also gold coins, a portal symbol and other related symbols that keep with the theme. The audio is quite simple and relaxing and doesn’t seem to distract from playing the game. 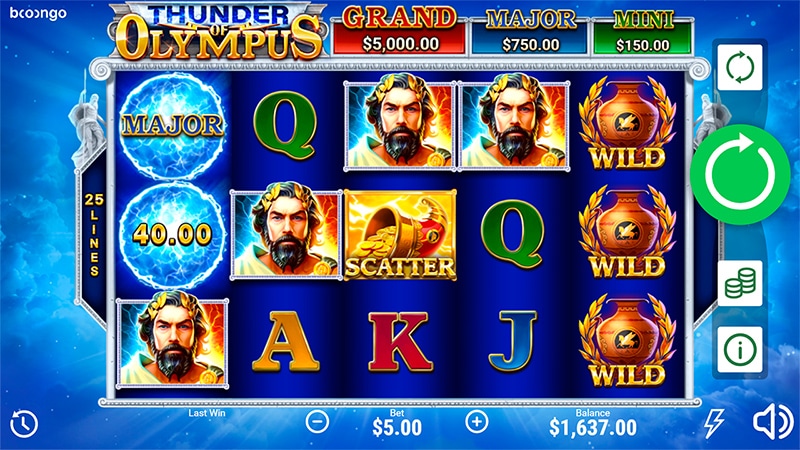 Thunder of Olympus features a Hold and Win option that sets this slot apart from others. This feature seems to be taking hold with other developers as well such as NextGen Gaming. The Hold and Win feature is activated when 6 or more scatters land on the reels. It is at this feature that certain symbols are kept stationary while the process of respins take place.

The Thunder of Olympus slot is quite entertaining and even more importantly, the jackpot can be attractive acan be a real hook in attracting players who seek to hit it big in this slot and that apart from the fact that the graphics are colourful and pleasing to the eye. Give Thunder of Olympus a try here at CasinoTop Canada, you can test the slot game absolutely free!