Tomb of Nefertiti
Play for Real

Take a trip to the ancient dusty plains of Egypt and seek out your fortune in gold in the Tomb of Nefertiti online slot. Brought to you by NoLimit City, the online slot has a 5 reel with 3 row setup and 20 paylines with up to 40 paylines in the bonus feature. The game comes packed with multiple bonus features such as the Raider Spins feature where you can get unlimited spins and an infinite multiplier!

How to Play Tomb of Nefertiti Slot

The entrance to Nefertiti’s temple can be seen in the background of the marble-encased reels. An approaching thunderstorm is imminent in the clouds above and the dusty plains really adds to the atmosphere of the environment. The base game symbols consist of the royals from 10 to Ace followed by the higher paying symbols. These consist of the ancient amphoras, the cat goddess Bastet, scarabs, the god of death Anubis and the sun god Ra. The soundtrack is quite catchy over long periods and creates a suspenseful atmosphere to the game. 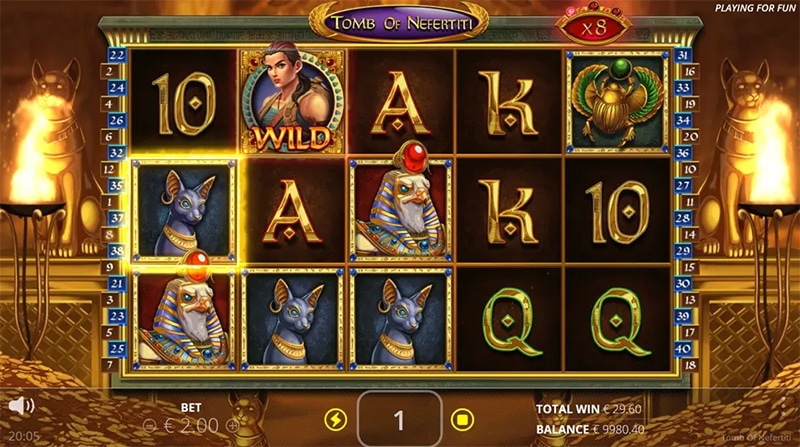 The first feature is the Win Respins feature. When landing a winning combination, the winning symbols will spin again with all other symbols locked in place. Any wilds that appear during the combo will also be locked and the spins will continue to pay until there are no wins landed.

With the Wild Raider feature, up to nine wild symbols gets added to reels 2, 3 and four in random spots. In the Curse of Nefertiti feature, symbols on reels 2, 3 and 4 will synchronize and show the same symbols, except for the bonus symbols.

Landing 3 or more bonus symbols anywhere on the reels will activate the Raider Spins feature. You will be awarded with 10 free spins, and every additional bonus symbol awards an extra 5 free spins. Twenty extra paylines are added during this feature, with an additional spin added for each Nefertiti symbol that appears. Wild Raider rules apply for each spin during the Raider spins feature with the difference of no limit to the multiplier.

It is quite refreshing to see for once an Egyptian-themed slot with Nefertiti which simply translates to “The Beautiful Woman has Come”, instead of the commonly used Cleopatra. NoLimit City is known for its out-of-the-ordinary designs and does not disappoint here either. The slot is entertaining to play, has great features and a decent win potential of up to 2,500 times your bet and a RTP of 96.19%. Play the Tomb of Nefertiti right here for free or real money at Casino Top Canada!