The theme of the Tractor Beam online slot is exactly that which is depicted in the title. Aliens have invaded earth and are cloning a farmyard full of animals by beaming them up to their mothership. This quirky title is brought to you by NoLimit City and consists of a 5x3 reel setup with 20 available paylines.

How to Play Tractor Beam Slot

There is a humorous cartoonish feel to the look in Tractor Beam. The game is set in a rural type American background. Here you will find lower value royal symbols carved into the wooden planks. They are accompanied by the higher value animal symbols. In their correct order of value are the chicken, the sheep, the pig and the cow. Land 3, 4 or 5 of them together and you will receive a payout equivalent to 0.75x, 5x or 15x your total bet. The very same values come from the wild which substitutes all standard symbols except for the bonus symbols and will appear on all five reels. The game has high quality visuals and the ominous soundtrack adds to the excitement. 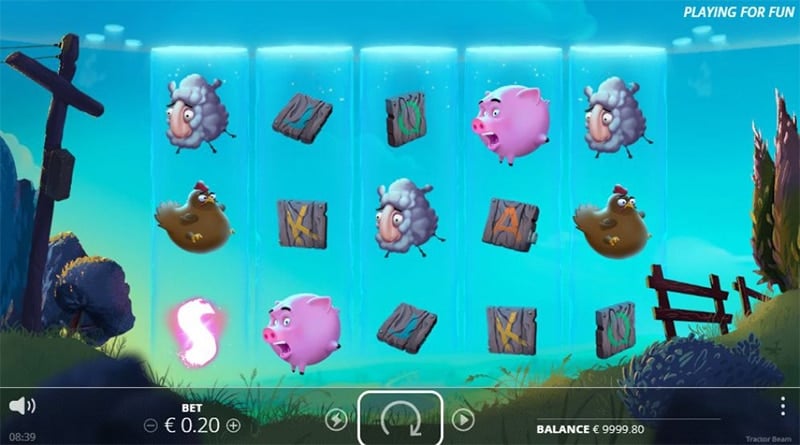 The Clone Attack feature can be triggered randomly on any given spin. At least one, but up to 4 reels will be filled up with stacks of the same high paying symbol.
The Beam 'Em Up feature is also triggered at random and while in effect, will remove all lower value symbols from the playing field. The reels will continue to spin with just high paying symbols and the wilds in play.

Landing 3, 4 or 5 scatter symbols in any position unlocks the Abduction Spins feature. You will then receive 7, 9 or 12 spins respectively. Once a winning combination is landed, the winning symbols will be removed from play for the duration of the feature. Each time you land one scatter symbol, a free spin gets added. If all the standard symbols are abducted from play, you will be left with wild only, resulting in spectacular payouts.

Tractor Beam is another great title offered by NoLimit City and is available for mobile or desktop computers. It is an "instant play" slot that runs directly via your web browser, with no apps needed. The game has an average RTP of 96.01% and has high hit frequencies due to it being a high volatility slot. NoLimit City reports an average hit frequency of 1 in every 3 spins. In effect, rewards should come rather frequently and the slot's highest payout is a maximum of 3, 408x your stake!