Willy’s Hot Chillies is a Mexican-themed slot that’s focused on chillies. This 5x3 grid slot features 20 paylines, and the team at NetEnt has provided you with enough special features such as free spins, multiplier wilds, and red-hot jackpots to ensure that you’re in for a long-lasting burn.

Learn how to play the game before trying to handle the heat that comes with this slot:

Willy’s Hot Chillies is set in a Mexican town, with mountains in the background along with a cactus and a sleeping man. The grid is surrounded by a wooden frame that’s decorated with chillies and a traditional pattern. The symbols consist of treasure chests filled with gold, pink pinatas, chilli sauce, tacos, hearts, spades, diamonds, and clubs.

The soundtrack consists of your typical Mariachi melody; however when the game idles only bass lines can be heard. As soon as you land on a win, you’ll start to hear more instruments come into a tune, which is a great touch. 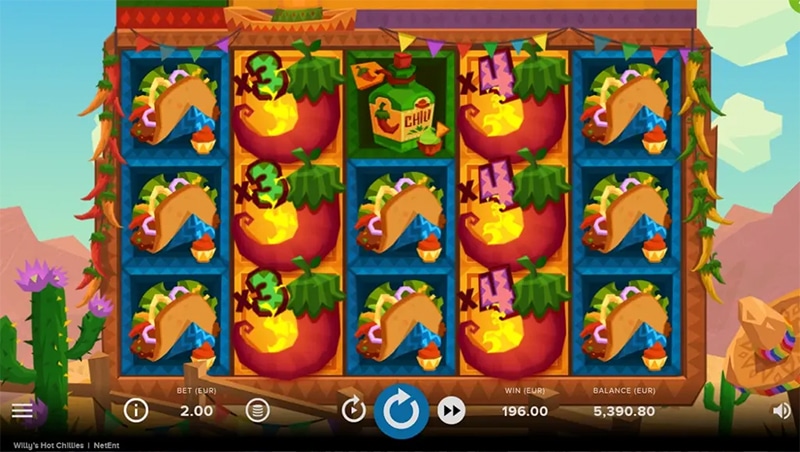 The most prominent feature in Willy’s Hot Chillies is the presence of Multiplier Wilds, these are like standard wilds but they are equipped with multipliers that range from x2 to x5, and stacks of them can appear on reels 2 to 5. Willy’s Hot Wheel feature can be triggered by landing on a bonus symbol and a stack of wild symbols.

Willy’s Hot Wheel could give you a range of different rewards such as multipliers, free spins, coin wins with more multipliers, Chilli Multipliers, and more. This is a feature that incorporates all other features into one, and this is what makes it so special.

Mexican-themed slots are always a treat as they generally come well-equipped with great music, a cool theme, and plenty of special features. Willy’s Hot Chillies is no different, and with the possibility to win up to 2,000x your bet, this is one of those games that can be deceiving, as the theme along with the symbols and the music seems like it’s a low-paying slot, whereas it isn’t.

Special features and a jackpot is what you’ll aim to get while playing this light-hearted slot and don’t be afraid to max out on your bet now and again, because you’ll be kicking yourself if you enter the bonus round with a low stake.