Win Sum Dim Sum is an Asian cuisine themed slot released by slots giants Microgaming in 2016 and has already built up a huge following. The fan-favorite features 5 reels and 3 rows with 9 solid paylines and is based on a popular Asian dish called Dim Sum.

How to Play the Win Sum Dim Sum Slot

Before we sink our teeth into some delectable dumplings, let's have a look at a few of the basics of the game's interface. Start by setting your preferred coin denomination by clicking on the +/- values. You can set the bet range from 0.09 to 22.50 coins per spin. When you are set, hit the spin icon to set the reels in motion. The paytable can be accessed by clicking on the drop down menu in the options bar.

The Microgaming team seems to always hit the nail on the head, and here they have found the correct balance between simplicity and entertainment value. The game looks amazing and the reels are quite large and detailed, using up 90% of the screen. Symbols found on the reels include sushi, lotus rice, steamed chicken feet and of course the royal cards from 10 to A at the low end. The in-game sounds are a mix of jingles and beeps that would fit right into a fruit-themed slot however, is not overbearing during long periods of play. 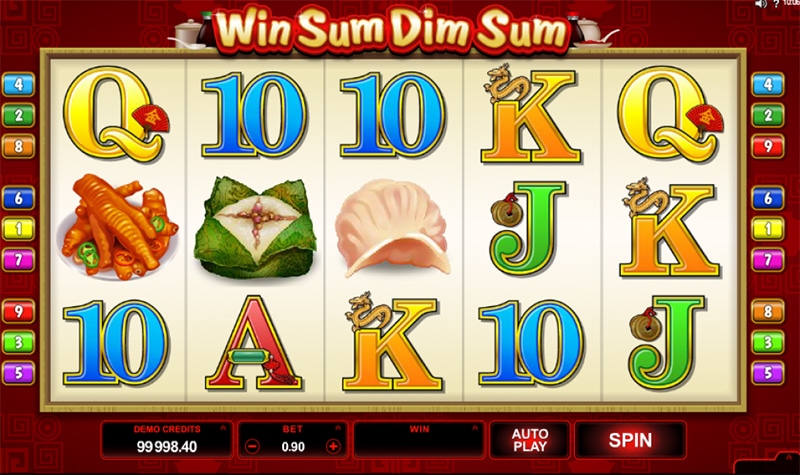 The Chinese steamers are the wild symbols and substitute for any base symbol in a winning combo. The game has an expanding wild feature for added win possibilities. During the base game, the wild symbol will expand when landed on reel 3 only, but will expand on reels 2, 3 and 4 during the free spins round. The scatter symbol is represented by the Chinese tea pot and will award 15 free spins for landing a combination of 3 or more scatter symbols anywhere on the reels. The free spins can also be retriggered by landing additional scatter symbols during the bonus spins round.

As you would come to expect from Microgaming, this well executed title has been flawlessly produced and runs seamlessly on any mobile device. Win Sum Dim Sum has a generous RTP of 97.0% and a maximum win potential of 3, 333x your stake on any given spin. A tasty treat indeed, and we know why this cuisine is attracting hordes of spinners. Play the Win Sum Dim Sum online slot right here at CasinoTop Canada!