The Effects of Weather on NFL Betting

The Effects of Weather on NFL Betting

NFL betting is extremely popular and the league is a much-anticipated event for both NFL fans and bettors. Once the lineups have been set and the preseason games have been played, it’s time to check how your favourite NFL teams will stack up. If you’re an avid fan, you’re aware that your team needs your unwavering support, especially when bad weather strikes. Most of the stadiums that NFL games are played at were built before retractable and domed roofs were considered. This means that game-time conditions and temperatures can have some effect on how well your team plays and the outcome. Below, we will be taking a look at NFL bets and how weather-related conditions can change the odds. 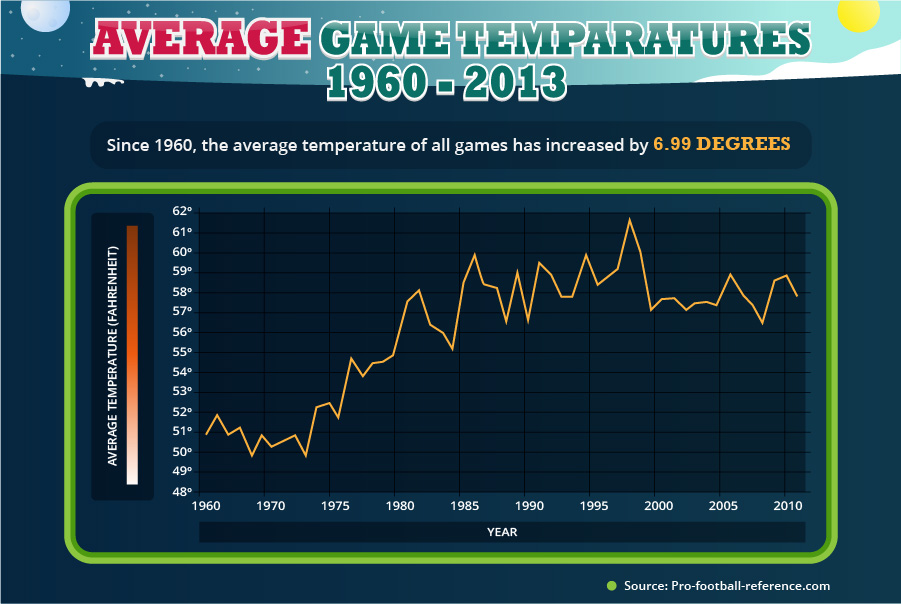 The NFL is considered to be a prime sport to play during cold weather. The expectation is that fans will tune in every Sunday of the season to see teams butting heads under icy conditions that often feature a blanket of snow. However, the recent expansion of the length in NFL seasons during winter has resulted in an increase of NFL games being played in warmer weather. This is partly due to the season starting earlier in September as well as the increase in the number of city stadiums in states with warmer climates. NFL teams such as the Jacksonville Jaguars, Tampa Bay Buccaneers and House Texas are some of the latest additions to the league that have caused a significant spike in average NFL game temperatures.

The Coldest Games in NFL History 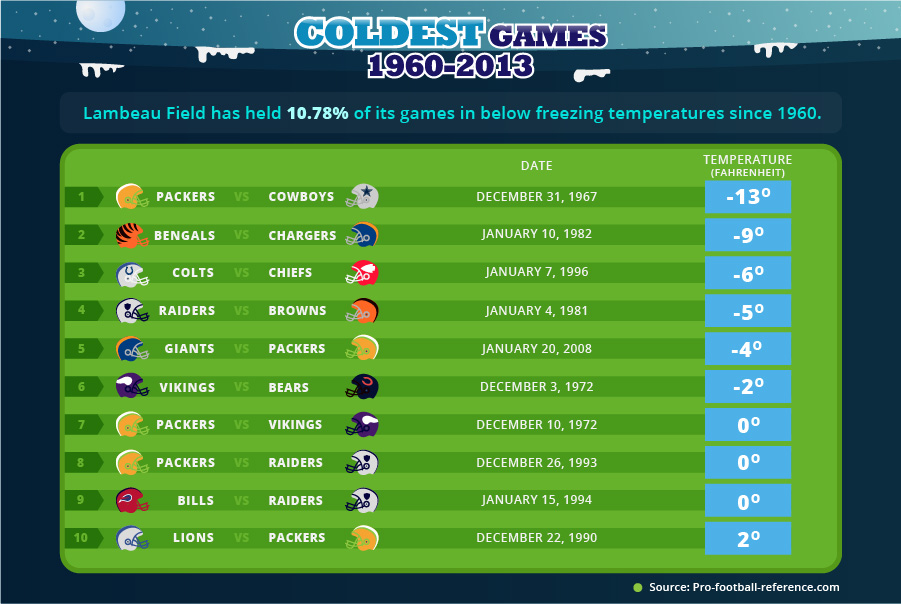 Despite the fact that football is a winter sporting code, drastic drops in temperature can be significant to the performance of teams. Icy weather conditions can make it challenging, and even impossible, to execute plays while the cold temperatures can feel positively joint-stiffening. A large number of the stadiums that host NFL games don’t have domed roofs and leave players vulnerable to these intense weather conditions, ensuring that fans and players alike are exposed to Mother Nature’s tough love.

If you’re wondering how cold it can get during the NFL season, you won’t have to look further than a game that took place in the late 1960s. The 1960 NFL season championship game was played between the Cowboys and the Packers and fans recall seeing the “Ice Bowl.” Temperatures plummeted to -13 degrees with a -48 low windchill. At these extreme temperatures, normal gameplay was all but impossible. Professional players experienced a significant number of turnovers and loss of footing. At this point, strategies were cast aside and the game was described as a fumbling event. 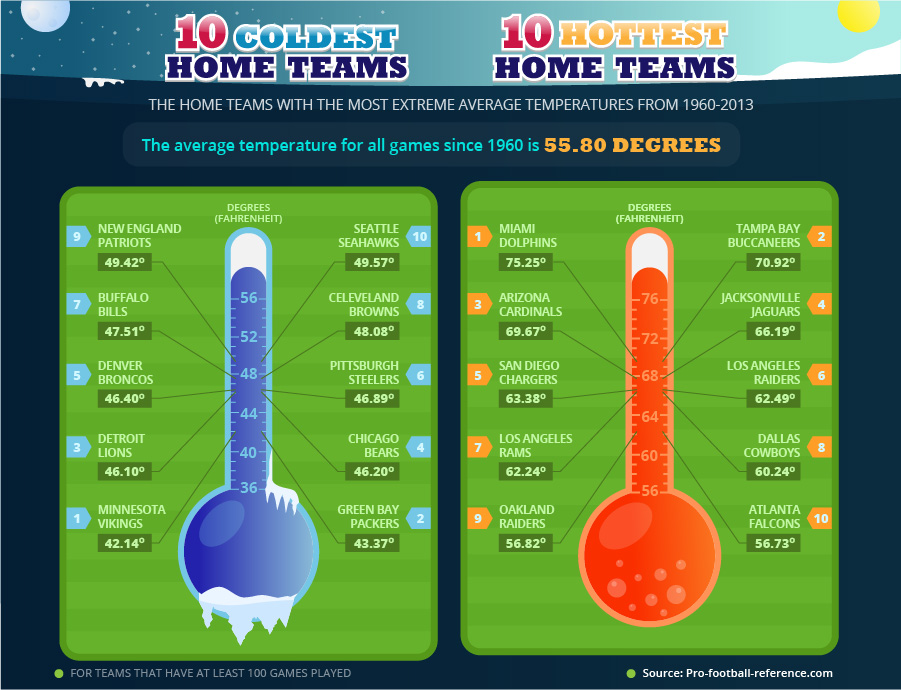 The ten coldest games in the NFL’s history were all played in single-digit temperatures and, in some cases, sub-zero conditions. On the other hand, the hottest game recorded took place in 2003 between the Green Bay Packers and the Arizona Cardinals, with a game-day temperature of 102 degrees. Both of these extremes can wreak havoc on the strategies and plays that the team planned as the players struggle to perform their best with abnormal weather conditions on the field. 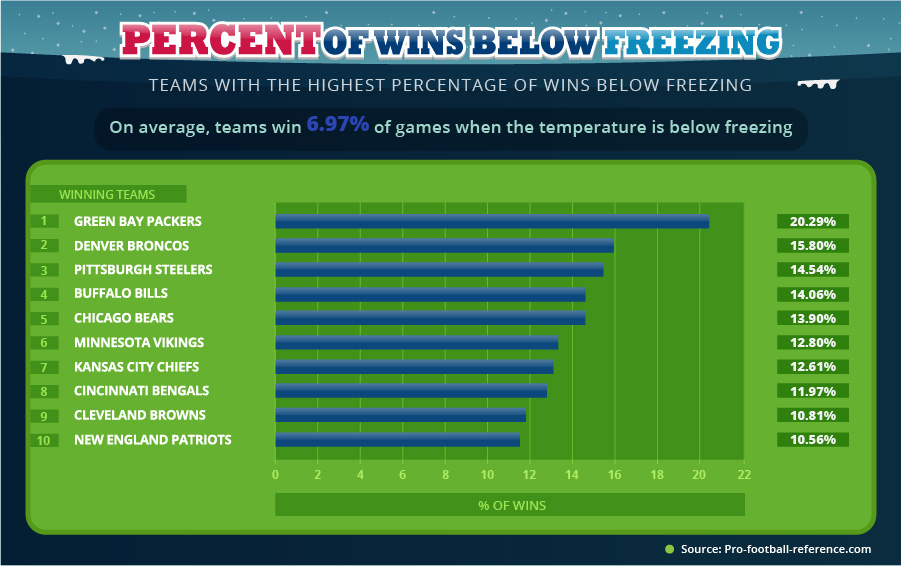 Normal conditions from team to team will vary based on the climates of the regions that they reside in. Therefore, it doesn’t come as a surprise that the winning percentage for teams that hail from colder regions is a bit higher when the weather drops. The Packers have the best record for cold weather wins in the NFL by a large margin. 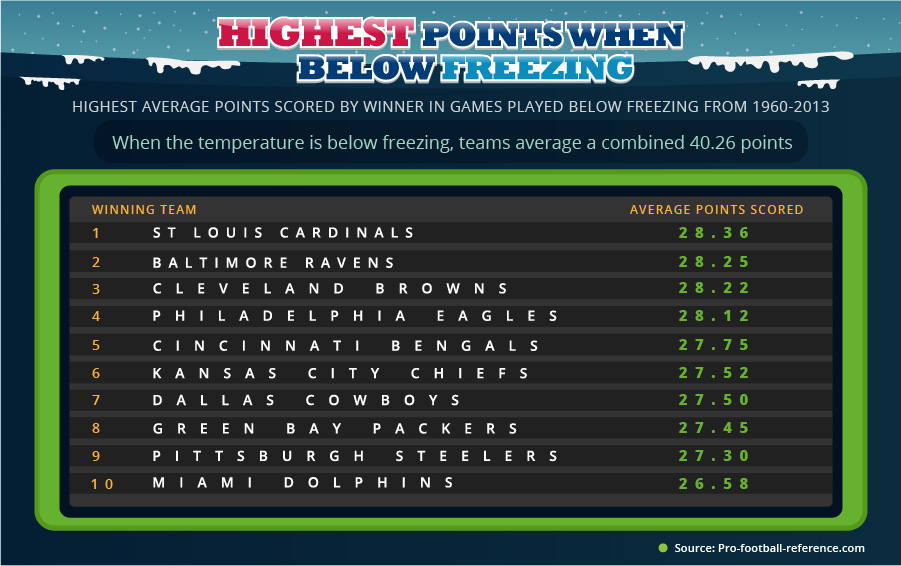 NFL players have trained long and hard to take the championship title each season and the presence of chilly air doesn’t necessarily get in the way of that. There are a handful of teams, such as the Browns, Cardinals and Ravens, who still bring the heat to the field even when the temperature drops. The teams that we’ve listed above have all achieved a 26 point average when weather conditions get frosty. 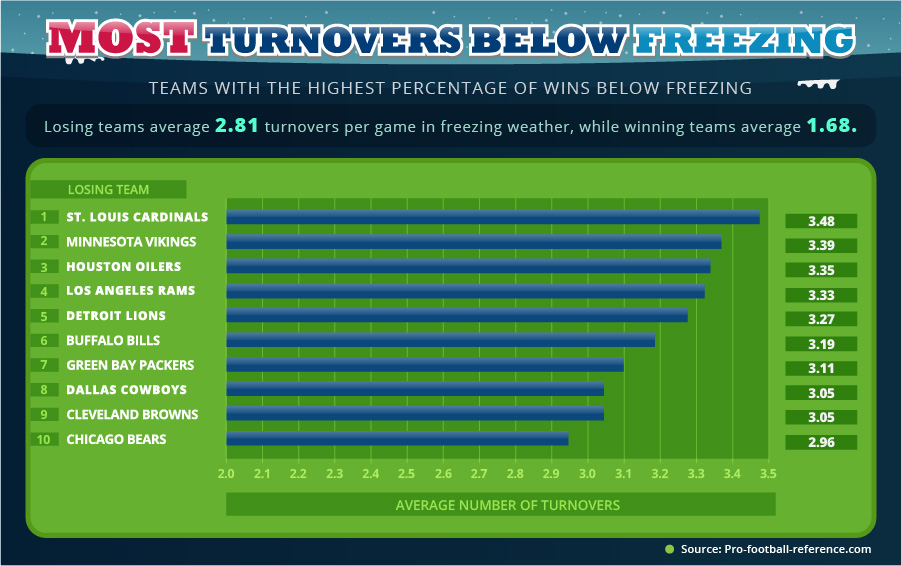 If you’re looking for an advantage with your fantasy league gaming this year, it might be time to consider how the weather affects your lineup. Above we’ve shared a list of the teams that committed a large number of turnovers on low-temperature game days. 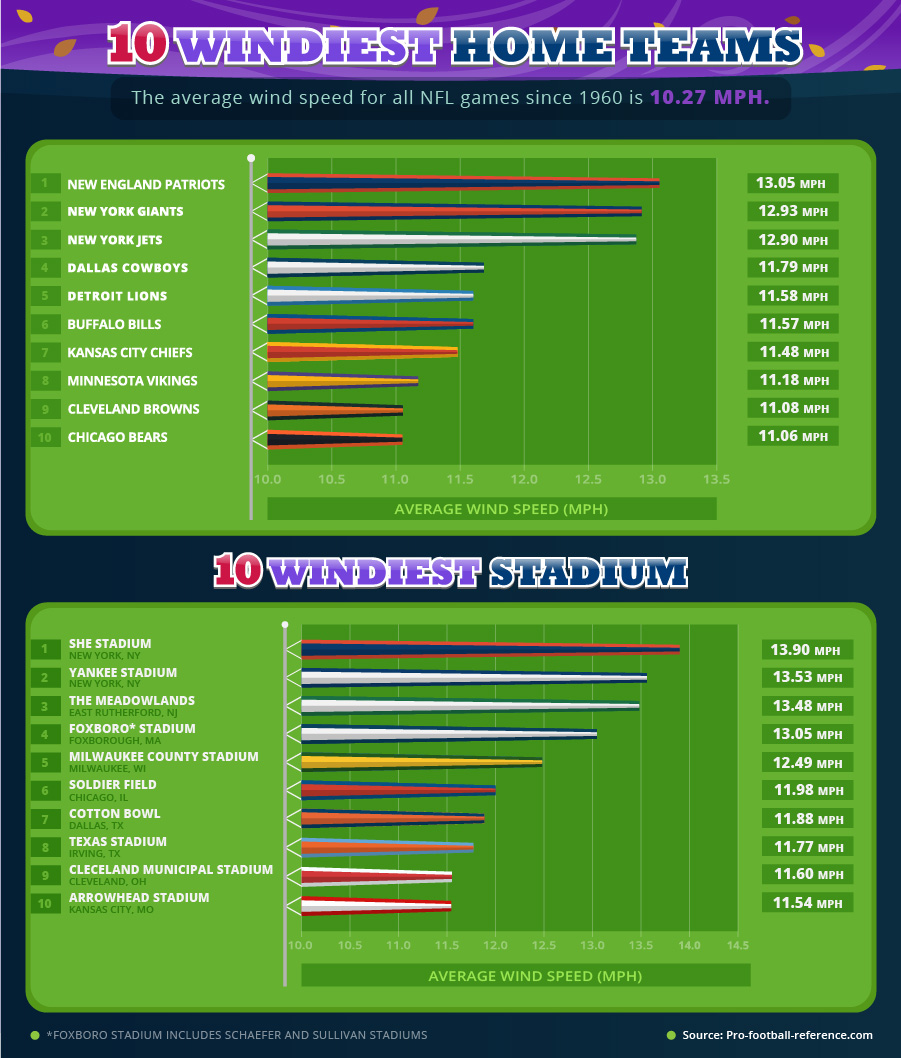 Temperature aside, the weather is made up of many different aspects and the win is one of them. Windy conditions can make scoring field goals and passing players far more challenging. Games that are played in stadiums in the North usually see the worst of this, with teams like the Giants, Patriots and Jets experiencing the worst of the wind and rising above it.

Yards Gone with the Wind

While playing in windy conditions does present a few challenges, there are some teams that have managed to maintain their players and strategy to overcome the weather conditions. This has resulted in these teams collecting many yards. Interestingly enough, data has revealed that there is a positive relationship between yards and wind speed during NFL games.

The stadiums that host NFL games are all large and beautiful but from a players’ perspective, they are not all created equally when it comes to the turf. There is currently no turf standard for the NFL and teams are allowed to choose between synthetic turfs, real grass or a mixture of both. This decision can make or break the game for the team depending on what they are comfortable with and used to. In most cases, teams perform better on turf that is similar or identical to the turf that’s in its home stadium.

While most people use cold weather and unpleasant conditions as an excuse to stay indoors, this is not the case for avid fans of the NFL. These individuals have shown to have a deep loyalty that becomes more prominent the colder the weather gets. Teams feed off of this energy and excitement, drawing on the fans’ support to see them through the toughest situations.

We made use of NFL meta results and stats that were pulled from professional football sites to provide the information and tools above. We analyzed these results and compared them to our criteria of weather conditions, field types and stadiums for all NFL games since the 60s.